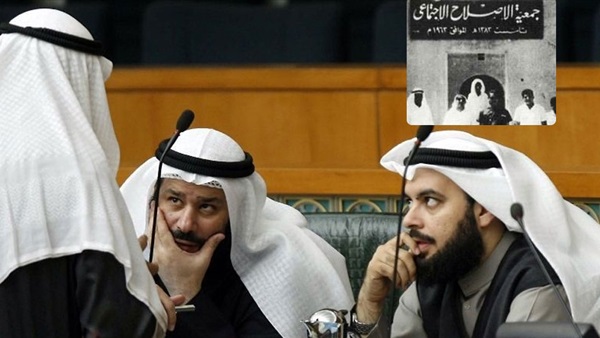 Brotherhood demands its terrorist elements not be deported from Kuwait

After the Muslim Brotherhood confessed to its cell in Kuwait, of which the Kuwaiti authorities had recently arrested a number of its members and handed them over to Egypt, the group issued a sharp criticism of Kuwait, accusing it of abandoning its policy of neutrality towards controversial issues in the region and holding it responsible for the fate of its members.

The terrorist group called on Kuwait to stop arresting its members there and handing them over to the Egyptian authorities, calling for the country to allow the group’s members leave the country to any other country safely.

Three new elements within the group’s cell in Kuwait were revealed, a cell that was uncovered last July, and the Egyptian authorities received eight of them, followed by the leader Khaled al-Mahdi two days ago. The Al Arabiya channel said the three elements are Khaled Mahmoud al-Mahdi, Eslam Eid al-Shuwaikh and Mohamed Abdel Moneim.

It later turned out that Mahdi was responsible for laundering money for the Brotherhood and sending it to a number of Brotherhood members in Egypt.

Al Arabiya revealed that Yahya Musa, who is responsible for the Brotherhood’s military wing and fled to Turkey, ultimately directed these funds to finance the operations of the two terrorist movements, Hasm and Lewaa al-Thawra, in Egypt.

He also directed a large number of fleeing Brotherhood youth and elements in Turkey, including Amir Bassam, secretary of the Brotherhood’s Freedom and Justice Party in Sharqeya governorate, appealed to Brotherhood leaders to intervene with the Kuwaiti authorities and prevent the deportation of the three to Egypt. They also called for international campaigns through international and regional human rights organizations to pressure Kuwait and prevent their deportation, claiming that they are being deported for political rather than criminal reasons.

In July, the Kuwaiti authorities announced the arrest of Egyptians belonging to an Islamist cell and sentenced them to up to 15 years.

MP Khaled al-Shatti said, “What the Brotherhood did in its statement against Kuwait is strange.” He pointed out that the country opened its doors to Egyptians of different orientations, embracing them unconditionally at the expense of the quality of expatriate labor and the efficiency of local production as well as the disturbance of the population.

Shatti said in remarks to the Kuwaiti newspaper Al Rai that “it is strange to overlook a political movement, complaining of paying the price for its actions, and violating the Kuwaiti pledge and hospitality.” He pointed out that the Brotherhood has broken the covenants and deliberately practiced activities to weaken Kuwait’s position towards Egypt and their strategic relationship. He added that “when you do not respect the conditions of hospitality, exceed the limits of residence, and assault the houses around me with arrows thrown from my house, it is natural that you receive the right response.”

Meanwhile, MP Ahmed al-Fadl commented on the Brotherhood’s statement, calling on its leaders to end the group’s aggression and interference against Kuwait and stop using it as a platform to offend other countries.

Fadl said in a press statement in response to the statement, “For our part as Kuwaitis, we pledge the virtue of the Guide, may God protect him, by supporting and affirming his statement and pressuring the government to meet its contents, provided that the Brotherhood stops sending its members to our country and interfering in our affairs, in addition to launching successive cyber attacks on Egypt and other countries from Kuwaiti territory.”

In this regard, Sameh Eid, a researcher of Islamist movements, said that the group’s elements may have thought that since Kuwait did not designate the Brotherhood as a terrorist group and they are there legitimately, then perhaps this is a green light to restructure the organization there.

The Brotherhood fears the repercussions of leaving Kuwait to other countries, especially Malaysia, Indonesia, Algeria, and other areas with a Brotherhood presence, and it also fears Kuwait’s reactions, Eid stated, adding that the group may therefore resort to using media and political pressure in order to prevent further deportation of its members, especially those who are wanted in official investigations or have already been sentenced.