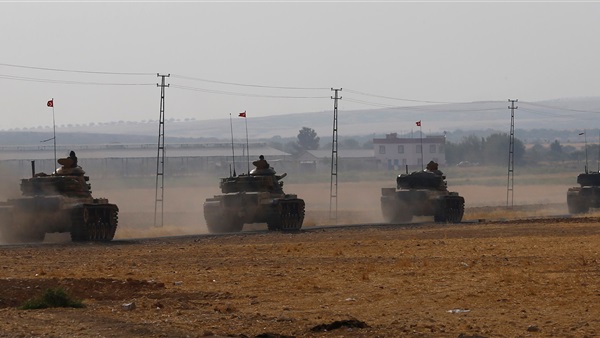 Although Washington and Ankara on Sunday, September 8 began joint patrols between Turkish and US soldiers in the safe zone in Syria, specifically in the border areas between the cities of Ras al-Ain and Tel Abyad, Turkish President Recep Tayyip Erdogan on the same day threatened to implement what he called “special plans” in the neighboring country, if the agreed upon zone does not start, accusing the United States of seeking to protect Kurdish terrorists.

In his speech on Sunday, during the opening of a number of development projects in the central province of Malatya, Erdogan pointed to the existence of great differences between Turkey and the United States on this issue, and he accused the United States of working to protect the People’s Protection Units (YPG), which Turkey considers a terrorist organization and an arm of the Kurdish Workers’ Party (PKK). Erdogan has threatened to implement a special plan if the United States does not cooperate with him on the safe area according to Ankara’s views.

In his speech, Erdogan revealed the reasons for his dissatisfaction with conducting joint patrols between his country and the United States, which began the same day, saying, “The safe area cannot be accomplished by flying three to five helicopters, conducting five to 10 patrols, or deploying a few hundred soldiers in the area in a formative manner.”

“The whole region must be effectively made safe in its cities and countryside so that a million people can live there,” he stressed.

Syria condemns “violation of its sovereignty”

On the other hand, the Syrian government condemned the start of joint patrols in northern Syria in implementation of the agreement of a safe zone between the two countries. The official news agency in Damascus SANA quoted an unnamed source at the Foreign Ministry as saying, “The Syrian Arab Republic condemns in the strongest terms the joint administration of the United States and the Turkish regime in patrolling the Syria.”

The source considered that this step is a blatant violation of international law and the sovereignty and territorial integrity of Syria, adding that this step represents aggression described in the full sense of the word and aims to complicate and prolong the crisis in Syria.

Turkey fears the expansion of the Kurds, so it launched two military operations in Syria since 2016, which took control of the border areas. Last year, it managed to take control of the Afrin region with pro-Turkish Syrian factions.

Earlier last month, US Defense Secretary Mark Esper told reporters that his country intended to prevent any unilateral Turkish invasion into northern Syria, adding that any such Turkish move would be “unacceptable.”

Turkish expert Mehmet Hammad said Washington will not fail to establish the so-called “safe zone”, and that the conflicting interests of the two countries in the region is delaying the US pursuit of cooperation with Turkey to complete this step.

Hammad explained that the problem between the two countries is that Turkey believes that the United States serves the interests of the Kurds more, especially since Ankara treats them as a terrorist group, while they are allies for the United States. He pointed out that the latter has supported the US militarily since 2013 to counter ISIS.

Regarding Erdogan’s threat to create what he called “special plans,” Hammad stressed that the Turkish president cannot do anything in this regard without the United States, stressing that his threats are only attempts to pressure and blackmail Washington.

Washington supports Ankara in many common interests, but it also supports the Kurds in their right to exist, which Ankara does not accept and instead wants to exclude, Hammad said, pointing out that Syria also will not accept the Turkish-American presence on its territory.