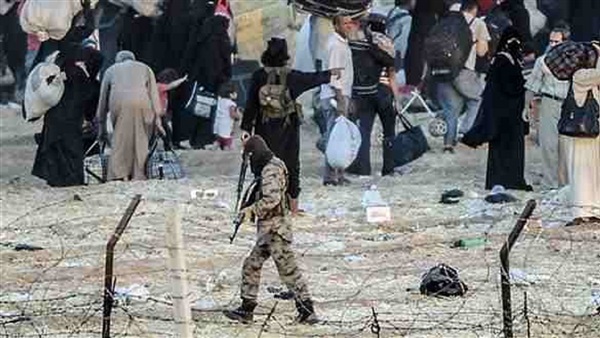 ISIS families in Iraq: An unknown fate, warnings of transition to time bombs

By the end of 2017, Iraq announced the total elimination of ISIS, but nonetheless, ISIS sleeper cells remained in a number of provinces, carrying out some light operations.

Despite purges by the Iraqi authorities, a bigger problem still plagues officials in the country – that of ISIS ‘sons and families, and the possibility of keeping them in camps or permanently evacuating them from Iraq.

On Tuesday, September 3, 2019, Ahmed al-Jubouri, Chairman of the Council of Salah al-Din province in northern Iraq, met with a delegation representing tribes of the province, to discuss the issue of bringing the families of ISIS militants, two days after the transfer of hundreds of them, from a camp for displaced people in Nineveh province, north of the city of Tikrit.

The president of the provincial council promised at this time to search for what he called consensus formula to resolve the crisis of these families, according to security sources, hundreds of them were transported by buses belonging to the Ministry of Transport, under tight security from a camp for displaced people in the city of Mosul, the center of Nineveh to another camp in Shirqat district north of Salah al-Din.

In the past few days, some 127 Al-Qaeda-linked families have been relocated to a special camp in Shirqat, north of Tikrit, by the authorities, coming from Hamam Al-Alil camp, south of Nineveh, before another 140 have joined them. The young people of the city of Tikrit gathered near the camp of Shahama in the city, to prevent the decision to shelter families belonging to ISIS.

According to local officials, the local Shirqat administration has approached the Federal Ministry of Immigration for the purpose of transporting IDPs from ISIS families to the Shahama camp in Tikrit, the current center for receiving them, especially since there are about 4,000 families there, and all new IDPs are supposed to be transferred during the current period.

The transfer of families angered the people, and the camps were attacked by unidentified people, said a member of the Salah al-Din Provincial Council in press statements. He said that there is no such families in camps for displacement, but were with members of the organization in Nineveh and Syria, and after they lost the battle they left their families for fate, so they took refuge in the camps in Al-Hol, Syria, and other camps in Iraq.

Residents’ pressure to refuse to shelter ISIS children and families appears to have paid off. An Iraqi security source revealed on Tuesday (September 10th) that security forces had evacuated Shirqat camp in Salah al-Din province from the families of ISIS militants.

Noman al-Jubouri, a lieutenant in Salah al-Din police, said in a press statement that the security forces supervised the transfer of families of ISIS militants from al-Shirqat camp north of Salah al-Din province to Shahama camp in the city of Tikrit. It came after constant pressure from the clans who refuse their presence.

Despite the relocation of families from Shirqat camp to Shahama, residents there also refuse their presence. When Iraqi authorities announced the start of deportations of the ISIS family earlier this month, residents demonstrated in Tikrit, protesting against them, and gathered in human bumpers in front of buses carrying them. The camp was targeted by a sound bomb without any human damage, according to security sources.

Residents in Tikrit reject the presence of families in Al-Shahama camp, indicating their instability, and that it will not be the main headquarters and the final settlement for them.

Why did Shirqat rise up against the families of the organization?

The children of Shirqat reject the existence of families and sons of the organization, because they experienced torture, killing and crises by the Islamic State as well as the execution of Ali Eid al-Jumaili, son of Shirqat, nicknamed “martyr of the Iraqi flag” after raising the Iraqi flag on the highest tower in the judiciary and toppled the flag of organization, in October 2016.

Residents in Tikrit reject the presence of families in Al-Shahama camp, indicating their instability, and that it will not be the main headquarters and the final settlement for them.