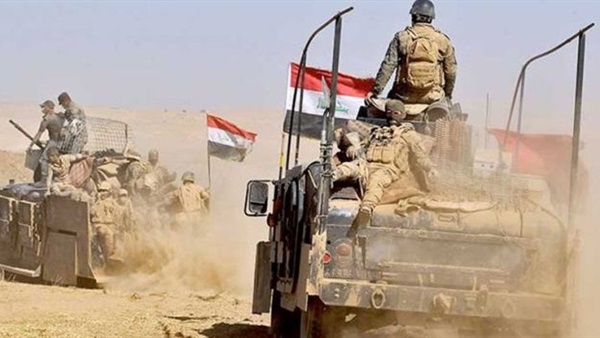 Iraq’s JOC launches 5th phase of ‘Will of Victory’

Iraq’s Joint Operations Command (JOC) has launched the fifth phase of a military operation, dubbed “The Will of Victory “, to “dry up the sources of terrorism” in the desert areas between the provinces of Anbar and Najaf along the Saudi Arabian border, Lieutenant General Abdul-Amir Yarallah, deputy head of JOC, said on Monday.

The military operation is aimed at pursuing sleeper cells and remnants of ISIS, aka Daesh, which continues to reorganize and launch attacks across different parts of Iraq.

In May, Iraqi forces launched the first phase of “The Will of Victory” to pursue ISIS elements in Nineveh, Saladin, and Anbar governorates and along the Syrian border.

Eight terrorists were detained in the first phase of “The Will of Victory”. The Iraqi forces seized and destroyed arms, missiles and other military equipment.

In the fourth phase, the forces killed 4 terrorists and destroyed arms and military equipment found in Daesh hideouts.

Commenting on the launch of the fifth phase of “The Will of Victory”, researcher Hisham El-Baqli, director of the Political Studies Unit at the Salman Zayed Center, said: “It takes place at a very critical timing to eradicate Daesh in Iraq, especially after reports of the group’s comeback to Iraq and Syria”.

The researcher told THE REFERENCE that it is a must the neighboring countries, especially Syria, along with regional and international parties should coordinate together to prevent the infiltration of Daesh members.

“This coordination is not only military, but it requires intelligence efforts as well to eliminate those groups in Iraq and Syria,” he said.

“The elimination of Daesh may seem easy, but there should be guarantees that Daesh won’t come back under any new formations in the Iraq and Syria,” he added.