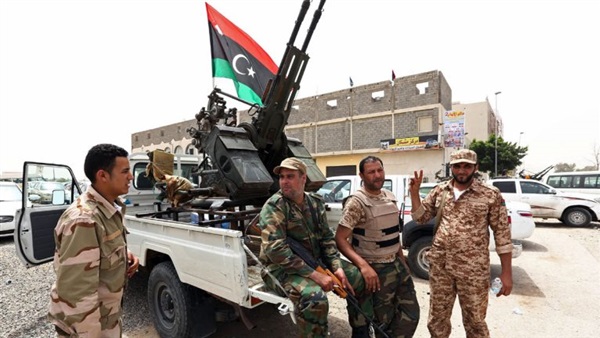 The danger posed by the Libyan crisis to national security in the region, especially the African Sahara, is prompting the Libyan National Army to move quickly to eliminate the militias and terrorist organizations that caused Libya to reach chaos.

Before the UN Security Council, UN envoy Ghassan Salameh called for a ceasefire and negotiations, and activating the UN resolution banning the supply of arms to Libya, because this – from Ghassan’s point of view – is the only solution to the crisis.

But the Libyan army responded to the UN envoy’s point of view, with intense shelling on the militias of the Muslim reconciliation government south of the capital Tripoli, targeting the concentration of terrorists in the axes of Ain Zara and Wadi al-Rabe’a.

Major General Ahmed al-Mesmari, the military spokesman for the Libyan army, said that Libya is engaged in a battle against Turkey on the ground, adding that Erdogan continues to tamper with the Libyan support militias and send weapons and military equipment to terrorists.

Al-Mesmari also called on the international community, the countries of the region and the Arab League to take a stand on this Turkish escalation towards the Libyan forces, which represent the Libyan state and the legitimate Libyan parliament.

“The Turkish intervention threatens the region as a whole, and we are now in a battle against terrorism, officially declared since 2014. The Turkish and Qatari role has now been revealed to us and we have reached the direct war between the Libyan armed forces and the Turkish army,” he said.

Libyan MPs and diplomacy of the battle

On the other hand, the Libyan member of the House of Representatives Abdul Muttalib Thabit said that the depth of Egyptian-Libyan relations and Egypt’s full support for the security and stability of Libya is contrary to the negative role played by countries such as Turkey and Qatar.

He pointed out that the Libyans are determined to fight the Turkish tide and resist terrorism, pointing to the efforts of the Libyan parliament, which is engaged in a diplomatic battle; Turkey is doing in support of terrorism.