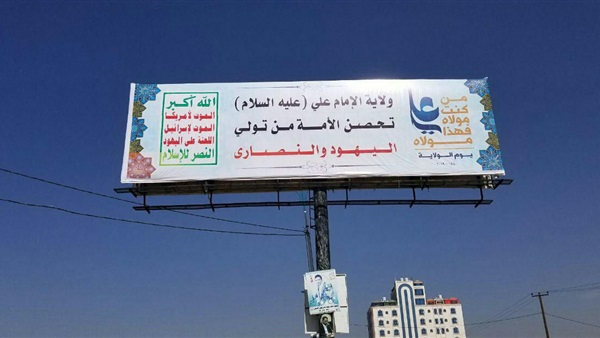 Since the Houthi coup took control of Sanaa on September 21, 2014, there has been an increase in the presence of Shiite events in accordance with the Twelver doctrine, serving the ideas of the militia in Yemen by talking about the state in order to dictate their sectarian rule.

Eid al-Ghadeer, or Wilayah Day, has become the most prominent event that has dominated the Yemeni scene in recent years, and the militia recruits all state institutions under their control to mobilize the Yemeni public to ensure spiritual control over Yemenis.

The Yemeni capital Sanaa appeared to be Iranian, and its streets were packed with thousands of banners and slogans to celebrate Ghadeer Day, which was publicly banned before the Houthi coup.

Three mass rallies were held in Sanaa on Monday, August 19 to commemorate the day of Ali bin Abi Talib’s mandate.

According to Shiite accounts, the Prophet Muhammad (peace and blessings be upon him), when returning from the farewell Hajj in 11 AH, famously said in the area of ​​Ghadeer Khom, “For whomever I was his master, then Ali is his master,” and ordered Muslims to follow Ali bin Abu Talib after him as the caliph of the Muslims. Shiites infer that this sermon bestowed to Ali the right of the caliphate and imamate after the death of the Prophet Muhammad.

Hundreds of thousands of people celebrated the occasion, carrying flags of freedom, slogans and banners condemning US policy in the region.

The Houhis have recently intensified the organizational, intellectual and religious courses of its elements and fighters under the slogan “wilayah.” In a previous speech, their leader promised rule by “divine right” similar to “vilayat-e faqih” in Iran.

Banners, billboards and slogans raised in the streets for Wilayah Day and Eid al-Ghadeer have been absurd and lavish at a time when the Houthis have been looting state employees’ salaries for a year.

The change of education curriculum in areas controlled by the militia means control of nearly five million students in the primary and secondary stages only, according to statistics in 2010.

In order to achieve its project, the militia replaced teachers in the Yemeni schools under its control with teachers loyal to them. The Office of Education in the capital, which is run by the Houthis, issued administrative decision No. 417 for 2018 on the rotation of 24 people from the principals of 70 schools, mostly with others who are loyal to the Houthis.

One of the Houthis’ means of bulldozing Yemeni identity is the daily repetition in local radio and media about the concepts related to religious behaviors and convictions, as well as reviving old disputes. This is despite the fact that Yemeni society was and still is varied in terms of sectarianism, with the Zaidi and Shafi’i doctrines having coexisted for a long time until the Houthis came.

Another means is through targeting the doctrine of young people by changing the curriculum and cultivating the group’s ideas within the curricula at different stages of study, which has been widely rejected and denounced among Yemenis. In addition, the schools have become platforms for incitement and polarization, as well as the implementation of periodic educational and sectarian courses, and even forcing employees in various institutions to listen to lectures by the group’s leader.

For his part, Yemeni politician Kamel al-Khoudani, leader of the General People’s Congress, believes that the revival of Wilayah Day is aimed at giving the religious character of the Houthis’ rule and changing the identity of the Yemeni people to the narrow sectarian identity of Zaidi doctrine as envisioned by the Houthis, and using it as a tool to stay in power.

The Houthis are taking the Iranian approach to governance, Khoudani pointed out, adding that Iran’s influence on the Houthi group is enormous, especially culturally and intellectually, in addition to the use of political slogans. The movement and its leader are imitating the Iranian methodology in everything. Even during his speeches, the group’s leader Abdul-Malek al-Houthi strives to imitate Hezbollah’s Secretary General Hassan Nasrallah.

Khoudani added that Iran’s influence can be seen at first glance from the Houthis’ slogans, which have been literally reproduced from the slogans of the Khomeini revolution.

In order to scrap the social and cultural conscience of the Yemeni people, the Houthis brought forth many extinct terms that divide the population on a class basis, entrenching their classification from high to low, including “masters, judges, tribes, slaves and servants,” with those close to the Houthi leader claiming the top of the classification.

Khoudani warned of the success of the Houthi plan in case it holds on to its authority in Sanaa and support is given to the militia to serve their project in Yemen and change the identity of the Arab-Yemeni state into a hostile sectarian state.