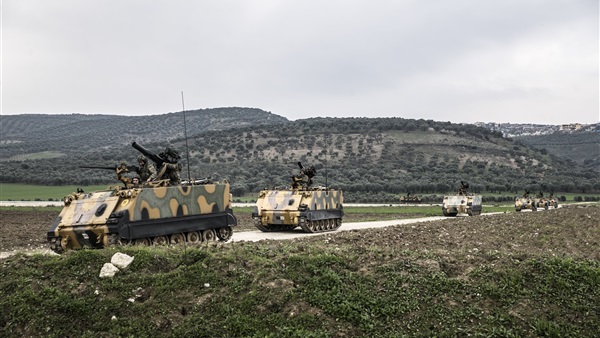 Unlike Turkey’s attempts to promote the idea of a safe zone in Idlib, northwestern Syria, what is happening is quite the opposite. The implementation was for the American part, not the Turkish, and the scene came according to the American perception, which confirmed Ankara’s submission completely to Washington’s wishes.

After the agreement between the United States and Turkey to establish a safe zone on the Syrian-Turkish border in Kobani and Afrin, passing through Jarabulus, which is located in the countryside of Aleppo, the outline for the zone was established during the month of July. Negotiations continue between the parties, but there are many obstacles. There is a Turkish desire to penetrate 30 kilometers into Syrian territory along 68 miles on the border. Turkey faced rejection by the United States, which does not want to penetrate even 5 kilometers inside the region.

The safe zone will be of a security and military nature. It was agreed between Washington and Ankara to be between 5 to 14 kilometers deep, and the parties have also agreed to withdraw heavy weapons for a distance of 20 kilometers, in addition to freeing the region of Kurdish People’s Protection Units (YPG).

One of the conditions for accepting the agreement was that Ankara would not repatriate Syrian refugees from other parts of the region, and Turkey of course agreed to the American orders.

The United States and NATO ally Turkey have suffered a complete breakdown in their relationship. Although Turkey and the United States have enjoyed a long historical partnership, actions have exacerbated the situation and created a gap between Washington and Ankara, most recently Ankara’s insistence on completing the Russian S-400 missile deal, which led to escalating tensions between the United States and Turkey. The Russian missile deal is a political dilemma not only militarily, but it also represents the first step to develop bilateral relations between Moscow and Ankara.

Years after Barack Obama’s administration failed in Syria, President Donald Trump followed Obama’s policy of supporting Kurdish forces in Syria until the Kurds became allies of the United States. When Turkey repeatedly declared its rejection of US support for the Kurds, it came to the point that Turkish planes attacked their bases in northeastern Syria, killing 70 of them. These actions led Ankara to move closer to Russia, until they reached a single policy on Syria after years of differences. The result was Russia providing Ankara with defensive systems.

There are accusations that Turkey does not pay attention to the Syrian issue and that its policy was delayed. However, Operation Euphrates Shield in 2016 represented a very important difference, and it was in response to the accusations against it. This was the first military intervention outside Turkey’s borders since the Cyprus peace process in 1974, but not the only one, as it was followed by Operation Olive Branch in Afrin in 2018.

The objective of Operation Euphrates Shield was to combat ISIS and other organizations, which gave Turkey full legitimacy on the international scene, while Olive Branch was carried out to confront the Democratic Union Party (PYD). Turkey entered the Afrin war to eliminate the YPG, which led to the displacement of more than 100,000 Kurds from Afrin. In parallel with the military campaign, the authorities mobilized the media and religious discourse behind the decision.

An agreement between Syria and Turkey provides for the extradition of all Kurds and does not allow any activity happening on its territory in order to harm the security and stability of Turkey. Also, Syria does not allow the supply of weapons, logistics, financial or promotional support for the activities of the PKK, which was classified by the Syrian forces as a terrorist organization, with its activities and subsequent organizations banned on Syrian territory.

The Kurds are the most important ally of the United States on Syrian soil. After the withdrawal of US troops from Syria, the Kurds became the only oil-controlling ally in the region. The Rumaila field produced 160,000 barrels per day before the war in Syria began in 2011. Its daily production then fell to 38,000 barrels. At the Jabasa field, production fell to 12,000 barrels after having produced more than 30,000 barrels before the war.

The Syrian government’s production of oil and gas from fields under its control was small during the war years, and then reached more than 22,000 barrels of oil per day, and more than 16.5 million cubic meters of gas per day.

On August 19, a Turkish military convoy loaded with ammunition targeted 25 military vehicles in Idlib. This is the first time that Syrian forces have entered the territory after losing control in 2014.

The Turkish convoy was heading to the Syrian area of ​​Mork in the province of Idlib, according to an earlier statement issued by the Turkish Ministry of Defense.

The ministry said the convoy consisted of a group of troops participating in the five-city agreement control points. The agreement provides for a truce and cessation of military operations in northern Syria.

Under the Idlib agreement, it was agreed to establish a demilitarized zone, and under the pretext of the agreement Ankara entered the Syrian territory, insisting on truncating the safe zone, and established a number of checkpoints in northern Syria in cooperation with a number of armed factions.

Turkey pledged to ensure the withdrawal of armed groups, including HTS, from northern Syria.