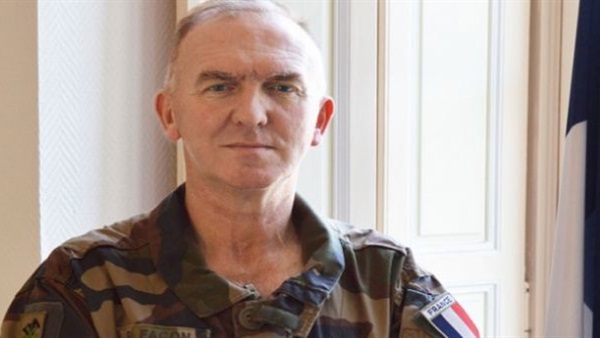 New commander for French troops in Sahel and Sahara region

The French government has appointed General Pascal Facon as the commander of French troops in the Sahel and Sahara region.

France has launched what is known as “Operation Berkhane” against terrorist groups and to preserve security in the region several years ago.

Facon said at a press briefing after a meeting with a number of Sahel and Sahara leaders that he is happy to take over the command of the force.

“I feel happy to return to Mali, the country I love,” Facon said. “I will work to eradicate terrorism and preserve peace.”

He vowed to eradicate terrorist groups active in the region.

Facon is a French navy officer. He graduated from the Special Military School, known as ESM, in 1984. He acquired huge experience, having participated in a number of operations in the Sahel and Sahara region.

He received training for a year at the School of the Infantry in Montpellier. In 1988, he was promoted to first lieutenant and then captain. Between 1995 and 1997, he became the head of military training in Nantes. Between 2000 and 2002, Facon worked in the government and then became responsible for the office of the prime minister.

Between 2011 and 2013, he worked as the chief of staff of the general supervisor of the French army.

On August 1, 2013, Facon was appointed as the deputy director of recruitment at the human resources directorate in the army. In August 2015, he became the head of the ESM.

Facon is expected to take over his new post as the commander of the French troops in the Sahel and Sahara region this month.

Berkhane aims first and foremost to fight terrorist groups in the region. These groups include al-Qaeda in the Islamic Maghreb, Ansar Eddine and Boko Haram.

Threats by terrorist groups active in the region increased in the past months. According to reports, security conditions in the region have not improved, even as French troops have been operating in it for six years now.

France has deployed around 5,000 troops in the region, which includes five staes, namely Mali, Mauritania, Niger, Burkina Faso and Chad.