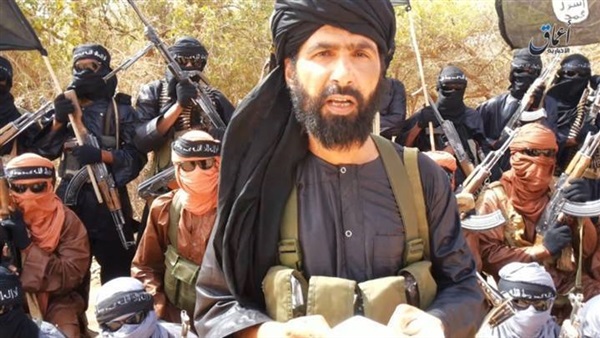 Abu Walid al-Sahrawi: The Daesh wolf who disappeared into the African Desert

In May 2015, Islamic militant and leader of the Islamic State in the Greater Sahara Abu Walid al-Sahrawi released a video with 40 of his fighters giving the pledge of allegiance, or baya, to Daesh leader Abu Bakr al-Baghdadi.

Lehbib Ould Ali Ould Said Ould Yumani is a former commander in al-Qaeda in the Islamic Maghreb, and part of the group that founded the Movement for Oneness and Jihad in West Africa in October 2011.

About four years later, Al Baghdadi appeared in a video in which he greeted Sahrawi and urged him to keep on plotting terrorist operations against France and the United States.

Later, Daesh media channels on Telegram broadcast footages of terrorist operations carried out by Daesh fighters in Africa, which all had Sahrawi’s signature all over.

Despite Sahrawi’s allegiance to Baghdadi in 2015, the Daesh leader did not recognize him or his group, however, the consecutive losses endured by the terrorist organization pushed Baghdadi into recognizing a new Daesh wolf in Africa.

Sahrawi made his first appearance in 2011 when he announced the foundation of what he called the Movement for Oneness and Jihad in West Africa (MOJWA), which claimed responsibility for the kidnapping of three European aid workers in Algeria.

On 3 March 2012, MOJWA claimed responsibility for a suicide car bombing at a paramilitary police base in Tamanrasset that resulted in injuries to 10 soldiers and one civilian, some of whom were in serious condition.

After Algeria arrested three Islamists leaders, MOJWA threatened to execute the hostages unless Algeria released Necib Tayeb, also known as Abderrahmane Abou Ishak Essoufi, a senior member of al-Qaeda in the Islamic Maghreb. The vice-counsul, Tahar Touati was executed on 1 September, according to Agence Nouakchott d’information.

After these operations, Sahrawi disappeared for several months before reappearing, declaring his group an affiliate with al-Qaeda and following the approach of its terrorist chief Ayman al-Zawahiri.

On May 15, 2015, the terrorist organization published an audio recording of Sahrawi, in which he said, “The Mourabitoun group announces its allegiance to the Emir of the Faithful and the Muslim Caliph Abu Bakr al-Baghdadi.”

However, his former companion Belmokhtar announced that Al Mourabitoun is still an affiliate to al-Qaeda before broadcasting an audio recording of terrorist Hisham Ashmawy, describing him as Emir of the Mourabitoun.

In August 2018, the United Nations Security Council and the United States of America separately placed Abu Walid on the list of the most dangerous terrorist figures, asserting that the Sahrawi was linked to Daesh.

Since then, the United States has announced financial rewards for information on the whereabouts of Sahrawi who disappeared after an air raid that targeted him.