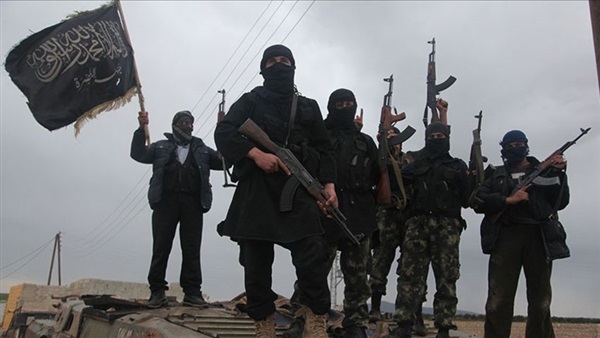 Al-Qaeda-affiliated Hidaya Foundation has issued its latest report on the so-called “Daesh Returnees,” regarding the latest fight between Daesh and al-Qaeda in Yemen’s Qifa.

A terrorist by the name of “Qorban”, who was a Daesh fighter before he split with two colleagues to join al-Qaeda in Yemen, said that the two terrorist organizations reached an agreement that vehicles owned them could pass inspection points, however, Daesh broke the deal and shot a car owned by al-Qaeda, injuring an operative.

Qorban added that tribes members have tried to mediate to end the conflict between the two sides, but Daesh refused to release two hostages who belong to al-Qaeda, therefore, al-Qaeda retaliated by breaking into Daesh-held sites and captured four of its members.

He also pointed out that Daesh issued a number of statements and announcements that falsely claimed that its members were treacherously murdered.

Qorban said Daesh withdrew from most of the sites it controlled despite claims through its media agency Amaq that it is controlling new areas within Qifa, adding that the terrorist organization opens fire at Yemeni people and shot a Yemeni girl with a sniper rifle in the head.

He further revealed that Abdullah Musaad, one of Daesh’s leaders who is responsible for communicating with tribes, is smoking and growing Khat, which is a popular drug in Yemen, as many Daesh members consume Khat and other drugs.

Earlier, a media organization affiliated with al-Qaeda published a footage of former Daesh fighter by the name of Abul-Atta who confessed that the terrorist organization blew up many Sunni mosques in Yemen.

Abul-Atta also revealed that Daesh is fabricating their own versions of news, even the organization shot an acting scene of its members supposedly fighting with the Houthi militia.