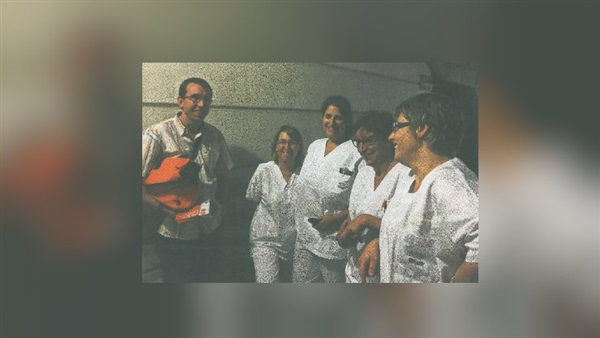 Omar Erekat: The deceitful doctor who exposed Brotherhood in France

He was placed in a hospital in Paris and claimed to have a long medical experience.

Nurses: From day one, we realized he was a fraud and knew nothing about treating patients!

Paris – Special to The Reference

The masks of the Muslim Brotherhood are still falling to show their ugly face and their great scandals that have spread recently all across Europe, especially France which is currently suffering from the mistake of hosting elements of the Brotherhood and radical fundamentalism.

The French website Riposte Laique made a big surprise when it reopened the file of a Muslim Brotherhood deceitful doctor called Omar Erekat as well as his many crimes and scandals.

In a report entitled “When will France get rid of the Egyptian psychiatrist Omar Erakat?”, the website said that the nurses of the medical center discovered the scandal of the Egyptian doctor who knows nothing about medicine. One of the nurses said in her testimony, “We were surprised that Omar Erekat did not have any medical experience and knew nothing about the profession. The young children with autism were the biggest victims in the hospital. They were terrified when they saw him because he was screaming in Arabic and doing unintelligible acts that had nothing to do with medicine.”

The beginning of the story:

The French website revealed the story of the Muslim fraud physician since 2014 after he sought political asylum in France in 2008 under the pretext of being subjected to persecution along with his wife in Egypt during the days of former President Hosni Mubarak.

The site said that in 2014 the French MP Olivier Dossub of the Socialist Party and Mayor of Anony prevented the establishment of a medical conference for Erekat on fighting autism because he doubted the scientific qualifications claimed by the Muslim Brotherhood doctor that he got in Egypt.

The French website said that Erekat claimed that he obtained a master’s degree in pediatrics from Egypt during his interrogation in 2014 by the Strasbourg police after chasing him with complaints demanding that he be stopped because he is practicing medicine without any experience or scientific qualifications. This comes in contrary to what he always claims especially that the French law strictly punishes any attempt to practice medicine at any hospital or medical center without the necessary practical qualifications. After this situation in 2014, Erekat and some of his co-workers made a stern speech to the Anony city council and tried to provoke controversy but to no avail.

The situation did not stop at this point, but the deceitful doctor who prefers to be called Professor Erekat was working at the Nevers Medical Center in 2016 as a pediatric psychiatrist. This time, one of the nurses, Natalie, told the website: “In July 2016, my colleagues in the nursing and medical teams said that Omar Erekat did not know anything about medicine. He used to shout at young autistic patients with words in Arabic and they were very frightened when they saw his face and his way of speaking.

It is interesting to note that Erekat was expelled after only one month of work at the Nevers Medical Center after the nurses and doctors at the center informed the administration of the fact that Erekat caused the panic of everyone working in the hospital for his ignorance and not knowing any means or methods of medical treatment. After a month with the physician, everyone in the hospital discovered that he did not know anything about medicine in addition to the fact that all medical circles in France have not heard about him before.

The site added that after Erekat was expelled from the medical center he moved to live elsewhere and left the residential complex where he was staying.

The site revealed that when he was moving his belongings, two BMW cars came down and a man with a beard helped him carry his luggage to disappear for some time after the scandal. The website also ridiculed Omar Erekat for writing a banner on his apartment, saying “Dr. Omar Erakat” while he knows nothing about medicine or its sciences.

The nurse Natalie narrated that several weeks after Omar Erekat was expelled from the Nevers Medical Center, the center’s management received a telephone call from a public hospital in Paris asking about Erekat’s experience because he told them that he has worked at the Nevers Center for more than 8 years and has a lot of experience in the field – it’s a strange attempt to lie to work in another hospital – we cannot believe what he did! ”

The website said that among the aides of the fraud professor is his wife Isabel Mikhail and his girlfriend Nathalie Getlef, who has been sentenced to prison in France. She was previously convicted in Canada and sentenced to 16 months in prison. He founded a medical consulting company with his girlfriend Natalie. Medical and scientific circles as well as many experts in France described the company as fake and having no real activities.

The website attacked France’s policy of allowing political refugees and extremist Islamic elements to take refuge in its territory and give them about 900 euros a month and the right to demand social housing. “While French newspapers and media focused on the news of the return of French tourism to Egypt and the fact that it is safe to receive any foreigners, we realize that all extremist and fundamentalist elements that existed in Egypt were deported to Europe and France and took political asylum. They receive about 900 euros a month and have priority in obtaining social housing. The French government does not think of handing them over despite Egypt’s request for arrest.”

At the end of the report, the website made fun of the deceitful doctor who worked for a month at the Nevers Medical Center and did not know anything about medicine and then went to another hospital and claimed that he worked in this medical center for 8 years. The month turned out to be eight years ago and a long experience in an area where nothing is known.