Latest Posts
17:15
Home Interviews The Reference pays a rare visit to the abducted Imam of Rome  at his home 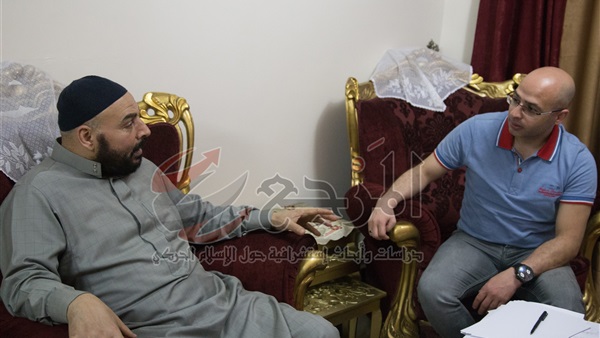 Abu Omar al-Masry, known as ‘the abducted Imam of Milan”, is unhappy with a television thriller co-written by Ezz-Eddin Shukri  and scriptwriter Mariyam Naoum to highlight his dilemma.

The eponym of a crisis that erupted in 2003 in three countries, the US, Italy and Egypt; revealed his concerns to “The Reference”, which interviewed him in his residence in Alexandria after a house arrest he had been put under ended in 2007.  He was shocked that he is portrayed in the serial as a Jihadist, who had an illegitimate child from a sexual relationship he had with a European girl. Although the work disgraces al-Masry for allegedly refusing to listen Montasir  al-Zayat, lawyer of Jihadists. His lawyer advised him to sue the writer for libel and claim a six-figure compensation.

Abu Omar al-Masry is also unhappy with the cover of the book. In his interview with the Reference, he explained that the cover features him before his abduction in Milan in 2003. “It was the CIA, which took this photo of me,” he told the Reference. To escape from the legal and moral accountabilities, the photo was airbrushed and modified to conceal the real features of the eponym.

In his interview with the Reference, Abu Omar al-Masry disclosed that he was member of a political party named after the long-standing Al-Wafd Party   by Dr. fugitive Ayman Nour.  Nour fled Egypt and settled in Turkey after the success of June 30 Revolution in 2013, which overthrew the Muslim Brotherhood and Islamists from power.  “Since he settled in Turkey, Nour has been in contact with me,” Abu Omar al-Masry confessed to The Reference.

“Abu Omar al-Masry” is the second of two novels Shukri wrote. The first is “The Killing of Fakhruddin” about Jihadist from the Egyptian city of Mansoura named Mohamed Sharaf, who was the Mufti of Egypt’s Al-Jihad group.

Abu Omar al-Masry came across Sharaf in a training camp in Afghanistan. Both men managed to travel to Europe and settle there. “The Killing of Fakhruddin” disclosed that an unnamed intelligence agency managed to persuade Sharaf’s son to put a bag stuffed with explosives in a building used by Al-Qaeda in Sudan. Al-Qaeda’s leader Osama Bin Laden, his deputy Ayman al-Zawahri and a number of their powerful assistants were supposed to attend the meeting planned there. A tip-off sent to the Sudanese intelligence authorities led to the arrest of Sharaf’s son, who was decapitated. Informed of his son’s brutal killing, the father denounced Jihadist ideology and rules.

Abu Omar al-Masry was the faithful student to several Salafi preachers in Alexandria, such as Yasser Burhami, Mohamed Abdel-Abdel-Azeem, Ahmed Hatiba, Ahmed el-Mahlawi and Wagdi Ghonim.  He also told The Reference that Jamaa Islamiya had admired his eloquence and volubility. “Friday sermons I used to deliver in a mosque controlled by Jamaa Islamiya in Alexandria in the 1980s attracted the attention of the Jihadist group,” he said.  Two of its key members, Mohamed Mukhtar and Mostafa Goumaa al-Moqrei’, sought to persuade him to pledge loyalty to the group.  Suspecting him for being a member of the Jihadist group, the Egyptian security authorities arrested him.

After his release, he refused to cooperate with the Egyptian security authorities to tip them off about the activities of the armed wing of the Jihadist group. His attempt to flee was aborted at the airport. He was told that he was banned from travelling abroad.

Some people helped him to obtain a fake student passport valid for six months. His first destination abroad was Jordan. After several-week sojourn in Jordan he pursued his travels to Yemen. He managed to get a teaching job in a religious institute there.

Continuing his journeys abroad, Abu Oamr Al-Masry  travelled to Afghanistan in the late 1988. Like dozens of Jihadists from Egypt, he was accommodated in the so-called “Camp of Mulsim Caliphate’ open in this Muslim country to provide fighters for Afghan war against the Soviet Union.

Abu Omar came across powerful leaders of the Jamaa Islamiya, such as Adli Youssef nicknamed Abu-Shoheib from the Upper Egyptian city of Menia. He also met Ahmed Hassan, nicknamed the Master, who was experts in explosives. His close friends in Afghanistan included Refaei Ahmed Taha, aka Abu Yasser el-Masry, who was the chief of Jamaa Islamiya’s Shura Council. Abu Yasser al-Masri, who was also the official responsible for the group’s military wing, was the first to form cells of Jihadists in Egypt.

In his revelations to The Reference, Abu Omar al-Masri reinforced reports that the Iranian intelligence agencies had spent several millions of US dollars on the “Camp of Muslim Caliphate” in Afghanistan. “It was Mohamed Shawki el-Islamboli, brother of the assassin of President Anwar Sadat in 1981, who was responsible to receive the money from the Iranians,” al-Masry said.

Nonetheless, during his stay in Afghanistan, Abu Omar al-Masry came across ironical situations. Despite his religious background, he was denied access to military camps controlled by Al-Jihad’s notorious fighters, such as the Abdulla Azzam camp. He was said to be unfit religiously to join their ranks. He said: “Al-Jihad had also had tough intelligence measures to control the security of its camps in Afghanistan, and to vet Jihadists before deploying them in the battlefields, whether in Afghanistan or abroad.”

He underwent high-level military training in camps run by Jamaa Islamiya. He became one of the staunch supporters to the idea of Muslim Caliphate.  He was sent to the warfronts in different areas in Afghanistan, such as Jalalabad. But he was upset after discovering that while illiterate young people were sent to the warfronts, warlords, such as Osama Bin Laden, Ayman al-Zawahri, Abdulla Azzam and Abu Obaiyda al-Banshiri were living in heavily-protected headquarters in Peshawar on the Pakistani-Afghani borders.   After nine months, he decided to return to Yemen to continue teaching in religious institutions.

Al-Masry revealed to The Reference the Muslim Brotherhood’s clandestine role to penetrate Western societies. “The MB established religious and cultural institutions in the West,” he said. “These edifices were run by Sheikh Abdel-Maguid el-Zendani, who is the founder of the World Oragnisation of the Scientific Wonders of Qur’an and Sunnah.”  Al-Zendani was also the head of the Shura Council of the Yemeni Reforms Party. “El-Zendani, who was one of the co-founders of Yemen-based MB, advised me to call for Islam in Europe,” al-Masry said. “He also promised me financial support,” he said.

In early 1990s, al-Masry travelled to Albania, in which he launched private business. During his stay he found himself entangled in an assassination attempt against the then Egyptian foreign minister Amr Moussa during his visit to Tirana.

“The plot was discovered by the Albanian intelligence, in collaboration with CIA agents in the American embassy in the Albanian capital, succeeded in saving the life of former foreign minister,” he said.

According to the chief spy hunter in the US embassy, the assassination attempt was planned by a Muslim charity organisation, Humanity and Reconstruction Outreach, which was run in Albania by Osma Roshdi, the media official of Jamaa Islamiya.

“One of the cars, which were loaded by explosives and was supposed to explode the moment Moussa’s motorcade would pass, was registered under my name,” Abu Omar al-Masry told The Reference. “My name was not featuring in the list of the assassins that were compiled by the CIA,” he added. He was arrested and sent to a prison in Tirana.  According to his CIA interrogators, al-Masry willingly revealed everything he knew about the Jamaa Islamiya, its leaders and its activities in Albania, Egypt and other countries. But he strongly denied accusations that they planned the assassination of the Egyptian foreign minister. He told his interrogators that Jamaa Islamiya was fully aware that any violent act in Albania would cost them a lot.

Al-Masry was released after he agreed to cooperate with both the Albanian intelligence and its US counterpart, CIA. He was assigned to collect information about Al-Jihad and Jamaa Islamiya in Britain, Germany and Italy. He was helped to marry an Albanian girl, who gave him two children.

Al-Masri instigated suspicions of the CIA agents in Albania when he travelled with his family to Germany.

But in his interview with The Reference, he ridiculed allegations about his cooperation with CIA under any circumstances.  “It was the Albanian intelligence, which attempted to persuade me to cooperate together,” he said. Rejecting the offer, he decided to return to Cairo. “Col. Ahmed Shaaban from the Egyptian State Security Investigation (now the National Security Agency) helped me to return to Egypt safely,” al-Masry said. He remembered that Col. Shaaban was known as the Legend. According to his story, en route to Cairo, Egypt Air flight made stopover in Germany.  He seized the opportunity to seek political asylum in this European country. “I was deeply concerned that the Egyptian authorities would arrest me again and I would be subjectd to torture in prison,” he said.

After a year-long stay in Italy, his application for political asylum was granted. He was also appointed in an Islamic centre run in Milan by Helmi Erman, one of powerful member of Jamaa Islamiya abroad. “Nicknamed Abu-Emad al-Masry, Erman who is from the Upper Egyptian city of Qena, received his fundamentalist ideology from Mohamed Shawki el-Islamboli, Mohamed Tayssir, Osama Roshdi and Anwar Shaaban,” el-Masry told the Reference. “He went to Afghanistan and Pakistan in the late 1980s of the last century,” said al-Masry. “Abu-Emad also travelled to Croatia before he decided to settle in Italy to open the Islamic centre in Milan,” he added.

During his stay in Italy, Abu al-Masry intesnfied his Dawaa activities. He published the magazine “Voice of Right”, and organized intellectual and religious seminars in this European country.  Nonetheless, his sermons and lectures were said to be stuffed with anti-US violent and xenophobic lines. Closely following his activities, the Italian security authorities bugged his residence. Accordingly, the Italians managed to collect a wealth of information about Jihadists and extremists in different European countries.  “CIA agents rented an apartment facing mine in Milan to monitor my movements round the clock; and know my guests,” he said.

Abu Omar was abducted on February 17, 2003 on his way to the Islamic centre in Milan by CIA agents. Blindfolded he was promptly switched to the Aviano Air Base, from which he was transferred to Egypt. Al-Masry’s abduction triggered controversies and disputes in Italy. In June 2005, the Italian prosecutors indicted 26 CIA agents, including the Rome station chief and head of CIA in Italy until 2003, for the abduction of al-Masry. The suspects were given sentences (seven and nine years) in absentia.

Al-Masry was sentenced to 6 years in jail in absentia by an Italian court for recruiting terrorists and sending them to destinations overseas.  He denied the charges, confirming to The Reference that the verdict was politically motivated to improve the relationship between Rome and Washington ‘at my expense’. He appealed against the sentence in July 2015.

In February 2016, a European court guarding human rights found the Italian government guilty of cooperating with the CIA to hijack al-Masry. The court  ordered 75, 000 euro worth compensation to al-Masry; and 15, 000 euros to his wife. The couple also jointly received 30, 000 euros for their sufferings.