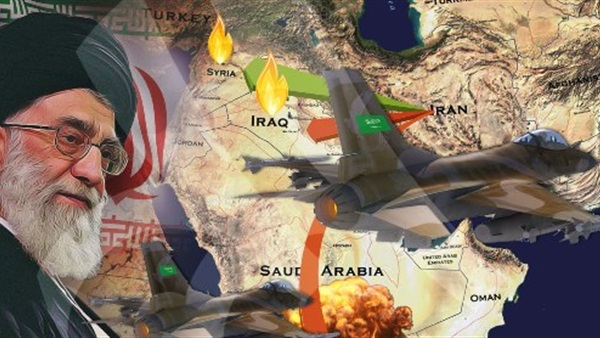 Iran’s knife in the Gulf’s back

Iran backs extremist organizations in the region with the aim of destabilizing its states and also exporting the ideals of its Islamic revolution.

Yemen’s Houthis are one of these groups which receive Iranian backing. The group works to destabilize the states of the Arab Gulf. It also works to strengthen Iranian presence in the vicinity of the Bab el-Mandeb Strait.

The Houthis emerged as a political opposition movement in the early 1990s to campaign for the rights of the followers of the Shia Zaidiyyah sect. The sect is named after Zayd ibn Ali, the grandson of Hussein ibn Ali and the son of their fourth Imam, Ali ibn Hussein.

They wanted representation at state institutions, following years of marginalization.

In 1992, Hussein Badreddin al-Houthi formed what later became the Ansar Allah (Supporters of God) movement to demand the rights of the adherents of the Zaidiyyah sect.

Similarities between Zaidiyyah and the sect of the followers of the 12 divinely ordained leaders abound. Adherents of both sects are specifically hardline. This was why Iran found it very easy to exploit the Houthis and use them.

Ties between the late Yemeni president Ali Abdullah Saleh and the Houthis were full of mysteries. Some analyses go as far as saying that Saleh was instrumental in the political rise of the Houthis.

Saleh, the same analyses say, wanted to open the door for the presence of a Shiite force that could counterbalance the force of the Salafists and the Yemeni Congregation for Reform Party which is affiliated to the Muslim Brotherhood of Yemen.

The late Yemeni president also wanted to use the Houthis as a pressure card against neighboring Saudi Arabia. Saleh used to incite continual wars between the Yemeni army, led then by Ali Mohsen al-Ahmar, on one hand, and the Houthis, on the other, in order to weaken the army and its leader. By doing this, Saleh wanted to pave the road for his son, Ahmed, to take over the rule of Yemen.

The Yemeni army failed in eradicating the Houthis in the six wars which lasted from 2004 to 2009, even as the Shiite movement sustained huge losses in them.

The first war, which started in June 2004 and ended in September of the same year, resulted in the killing of the founder of the Houthi movement, Hussein Badreddin al-Houthi. The second war ended in the surrender of Houthi leader, Abdullah al-Ruzami, to Yemeni authorities.

The third war, which erupted in November 2005 and came to an end in January 2006, aimed to deflect public attention from deteriorating conditions in Yemen ahead of the country’s presidential election. The fourth war, which broke out in January 2007 and came to an end in June of the same year, opened the door for Qatari interference in Yemeni affairs. Doha succeeded in stopping the war. It also offered Houthi leader, Abdul-Malik al-Houthi, political asylum. Qatar also mediated the release of some Houthi prisoners from Yemeni jails.

Qatari mediation did not, however, succeed to the end, which opened the door for the breakout of the fifth war between the Yemeni army and the Houthis (March – July 2007). The war was unilaterally stopped by the Yemeni army. The unilateral cessation of fire, which was declared on July 17, 2008, coincided with the 30th anniversary of Saleh’s accession to power in Yemen.

The sixth war effected a radical change in the status of the Houthis. It turned the group from a merely local Yemeni movement to a regional one that threatens the interests of neighboring states, such as Saudi Arabia. During this war, the Houthis staged attacks against Saudi posts on the joint Saudi-Yemeni border. The Houthis also overran the Mountain of Smoke, a Saudi territory in the southwestern part of Saudi Arabia. This precipitated a Saudi military operation to liberate the area from Houthi occupation.

The Houthis were keen on redrawing Yemen’s political map after the February 2011 revolution. They elbowed all political opponents out of Yemen’s political stage. At the beginning, the Houthis got rid of Salafist forces in October 2013 by besieging them in the northwestern town of Dammaj and cutting off all supplies from them.

Soon after this, the Houthis picked up a fight with the tribes in Arhab District in Yemeni capital Sana’a in February 2014. In July 2014, the Houthis overran Amran province and kicked militants affiliated to the Yemeni Congregation for Reform Party out of it.

The political rise of the Houthis was accompanied by Iranian support, especially when the Houthis and Yemeni President Abdrabbuh Mansur Hadi hit each other head-on.

On September 21, 2014, the Houthis overran Sana’a and controlled positions of the Yemeni army. On January 19, they laid a siege around Hadi’s residence and forced him to submit his resignation on January 22. On February 6, the Houthis issued a constitutional declaration in which they dissolved the Yemeni parliament and formed a revolutionary commit to run Yemen’s affairs in cooperation with Saleh’s Popular Congress Party. Hadi had to move to the southern city of Aden and on February 21 he said he had reconsidered his resignation. This encouraged a joint Houthi-Saleh force to occupy Aden.

Hadi travelled to Saudi Arabia and asked the states of the Gulf Cooperation Council to intervene in Yemen. This opened the door for the launch of “Operation Decisive Storm” by a Saudi-led coalition.

On July 22, the coalition succeeded in liberating Aden from Houthi control. These military moves were accompanied by others of a diplomatic nature at the United Nations. The Houthis refused, however, to hand over power and worked to sabotage all efforts to resolve the Yemeni crisis. This was clear during the negotiations that took place in Kuwait in April-July 2016.

United Nations envoy to Yemen Ismail Ould Cheikh Ahmed had to resign on January 22, 2018. Before he submitted his resignation, Ahmed said the Houthis refused to offer real concessions.

Relations between the Houthis and Saleh were full of tension as a result of the desire of the Shiite group to marginalize the former president in the Revolutionary Committee. Saleh expressed a desire to open channels of communication with Saudi Arabia and disengage from the Houthis. This paved the road for his assassination by the Houthis on December 4, 2017.