Latest Posts
14:52
Home News No one can break the unity of Egyptians, Sisi says 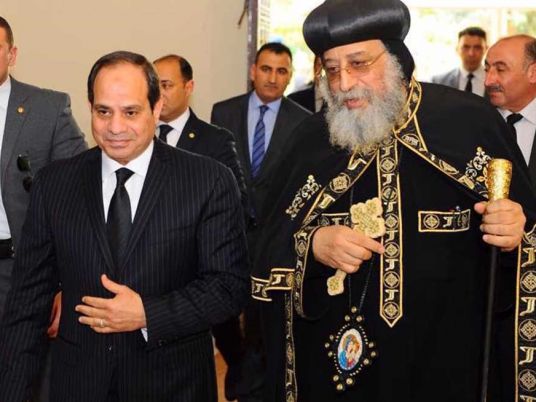 No one can break the unity of Egyptians, Sisi says

In his brief speech, President Sisi sent his sincere greetings to Pope Tawadros II of Alexandria and Patriarch of the See of St. Mark, wishing the country the progress and prosperity.

Sisi affirmed that the bond between Copts and Muslims is stronger than any evil and malicious force which seeks to hinder Egypt’s accomplishments during the past years.

Sisi added that the solid fabric of Muslims and Christians where the Egyptian society contains will not allow anyone to tamper the state’s unity.

ِِAmid an air of joy, President Sisi extended congratulations to the Pope and the worshippers and left the new Nativity of Christ Cathedral at 8 o’clock.

In January 2017, following twin terrorist attacks that killed at least 27 Coptic Egyptians at St. Peter and St. Paul’s Church in Cairo in December 2016, President El-Sisi commissioned the construction of the country’s largest mosque and church in the new administrative capital to become symbols of coexistence and national unity.