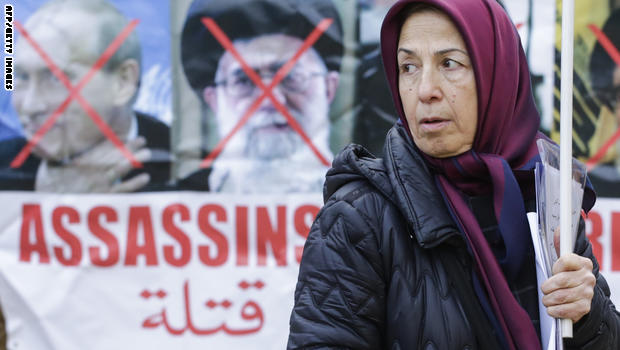 A woman looks on next to the crossed out portraits of Russian President Vladimir Putin and Iranian supreme leader Ayatollah Ali Khamenei on January 3, 2018, in Brussels, during a demonstration in support of the Iranian people amid a wave of protests spreading throughout Iran. Violent demonstrations have rocked Iran since December 28, 2017, leaving at least 21 people dead, with protests that started over the economy turning against the Islamic regime as a whole. The wave of demonstrations, that kicked off in second city Mashhad on December 28 and quickly spread, is the biggest in the tightly controlled country since unrest over a disputed election in 2009. / AFP PHOTO / BELGA / THIERRY ROGE / Belgium OUT (Photo credit should read THIERRY ROGE/AFP/Getty Images)

Iran’s Revolutionary Guard (IRGC) has accused the Unites States and Israel of sparking the protests which are partially caused by the economic difficulties and corruption.

The IRGC posted on its officials online page that the Iranian state as well as its security forces have broken down the chain of unrest created by the United States and the Zionist regime of Israel, the BBC reported on Sunday.

The recent demonstrations in Iran are the biggest, since protests in 2009 which broke out against the reelection of former President Mamoud Ahmadinejad, and lasted for months before being crushed by security forces. (MENA)