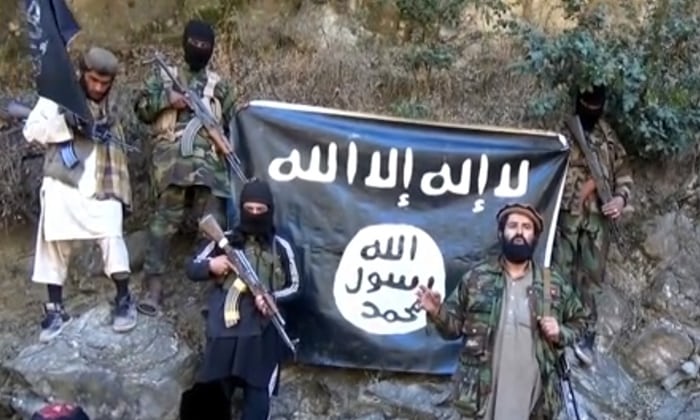 Foreign fighters who claim allegiance to Islamic State are gathering dozens of recruits in eastern Afghanistan, luring would-be jihadis with generous resources and the group’s powerful brand, according to a Taliban fighter who has met several of their commanders.

The rapid and dramatic victories clocked up by Isis in Iraq, Syria and Libya have attracted some young men with specific grievances against government or foreign forces, who simply want the strongest possible allies.

Others seem drawn by the novelty of an upstart force, the Taliban veteran said, or by the apparently deep pockets of a group that boasts laptops, benevolent funds to help fighters’ families when in need and pick-up trucks instead of the Taliban’s more modest motorbikes.

“This is something new in the market,” said the commander, who is based in Ghazni province, south-west of Kabul. “They think Isis is strong compared with the Taliban, and can help them achieve their goals.”

He agreed to the interview because of his concerns about the new arrivals, particularly Isis’s support for sectarian violence, but spoke on condition of anonymity.

Isis said in January it had expanded its self-declared caliphate to “Khorasan”, a historical region that includes Afghanistan and parts of neighbouring countries.

President Ashraf Ghani has warned of the “terrible threat” from the group. “Daesh (Isis) is already sending advance guards to southern and western Afghanistan to test for vulnerabilities,” he told the US Houses of Congress earlier this year.

Initial gains in southern Helmand, where the group recruited a former Taliban leader who had been held in Guantánamo Bay and had connections to the Middle East, were undermined when he was killed by a drone strike after just a couple of weeks.

Another cell has been confirmed in western Farah province, according to the Afghanistan Analysts’ Network. A video of Afghan and Pakistani militants swearing allegiance has been followed by reports of Isis fighters in many other parts of the country, although none have been confirmed.

Many of the foreign fighters in Ghazni and neighbouring areas only crossed into Afghanistan to escape a recent Pakistani military campaign, an elder from the area said, and it is unclear if they have genuine links to Isis, or are just hoping to capitalise on the group’s aura of success.

Even without direct connections, however, the successful recruiting campaign in eastern Afghanistan suggests that the Isis brand may be as much of a threat to the government and the Taliban as the movement itself.

“There has been over 30 years of civil war in Afghanistan, and these people are also bringing war. I have been fighting for over 30 years to solve our own problems, so how can a foreigner come and resolve them?” the fighter said.

So far there has been little tension between the Taliban and those claiming to fight for Isis, in part because the newcomers have kept a low profile, doing little more than gathering supporters.

“No one knows who is leading these people in Afghanistan and Pakistan, at the moment what they are doing is recruiting,” the Taliban commander said. “They are in groups of a few dozen and do military exercises, going up mountains and down.”

He estimated that several districts have Isis units more than 100 men strong, although because they shun the informal black uniform embraced by the group elsewhere, the militants can be hard to identify or count.

“It’s difficult to get information about Isis in the provinces, because they are in normal clothes, many look just like Pashtuns. You don’t realise until you talk with them that they are foreigners,” he said.

Taliban commanders reluctant to open up a second front while fighting the government, and well aware that their fighters have been impressed by Isis victories in the Middle East, are warily tolerating the new arrivals.

For their part the Isis leaders insist that they are fighting for a larger Khorasan and have no permanent ambitions in the area, despite rich mineral deposits there.

“They said ‘We will coordinate with you, we are not going to be staying here a long time’,” the fighter said, adding that the Isis men were warm, even jovial, flinging their arms around his shoulders during the talks.

That warmth is unlikely to last if the foreigners have or forge real Isis links, and stay any length of time, as the two groups do not make natural allies in faith or politics.

Both want to set up states governed by sharia law, but the Taliban are essentially a nationalist group that wants to transform Afghanistan, while Isis does not recognise nation states and instead claims to be fighting for a regional caliphate.

And while to outsiders they might seem united by an ultra-conservative interpretation of Islam, in fact they have serious religious differences. Most Taliban follow the Hanafi school; to the Salafi purists of Isis their beliefs are flawed.

“Whenever the public asks them what they are doing, they say ‘your faith is weak, we want to make it strong’,” the Talib said, citing the group’s fierce sectarianism and intolerance for shrines.

Through decades of war Afghanistan has largely avoided the sectarian violence that has devastated communities in neighboring Pakistan and the Middle East.

However several recent attacks including a kidnapping near Ghazni have raised concerns that foreign fighters may be importing this particular blight to add to Afghanistan’s other troubles.

“They have the attitude that they want to kill all the Shia people living in the province, that’s why others are worried. The Shia pray, they know Allah, they have scholars, how can they [Isis] call them infidels?” he said.

Residents in areas with an Isis presence are mostly very devout, and unhappy about a group that questions their faith, threatens their way of life, and is reported to have burned one shrine, but they feel helpless to stop them.

“[Isis] are not powerful enough to stop people going to school or control the clinics, but people are pessimistic and can see that things will go badly,” the fighter said.

“The mullahs and Islamic scholars in these remote areas … don’t dare to take a stand against them, because [Isis] will easily shoot and kill people.”