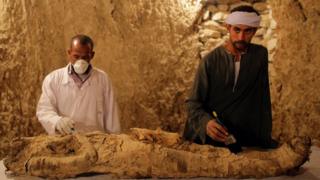 Egypt is hoping to give tourists a new reason to come visit. For the first time, the country has opened up two small tombs, believed to be about 3,500 years old, in the Nile city of Luxor.

Archaeologists displayed artifacts from one of the tombs, including a mummy who was most likely an ancient Egyptian official, wooden funerary masks, small statues, and elaborate wall paintings.

The tombs are in the Draa Abul Naga necropolis, which is known for its temples and burial grounds. They were discovered in the 1990s, but kept sealed until recently.

The Egyptian government announced today that it finally opened them in order to promote tourism. For decades the country was a top destination for travelers visiting North Africa. But since its 2011 uprising, the country has struggled with terrorist attacks and political turmoil that have kept tourists away from its ancient sites. It has launched different programs in an effort to revive its tourism industry, which it believes could soon return to pre-2011 levels.

“It’s truly an exceptional day,” Egypt’s antiquities minister, Khaled al-Anani, said at an event. “The 18th-dynasty private tombs were already known. But it’s the first time to enter inside the two tombs.”