Latest Posts
20:57
Home Book Reviews The Many Faces of Extremism (2) 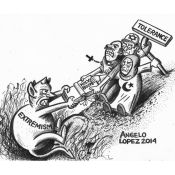 One form of extremism that is often neglected is social extremism. We understand that social phenomena of exclusion and/or domination of others are important to keep in mind as well when we talk about extremism. In this paper, only sexism and racism will be discussed briefly, although other social phenomena could be included, like homophobia or xenophobia. In fact, the exclusion of others may be based “on sex, race, color, ethnic or social origin, genetic features, language, religion or belief, political or any other opinion, membership of a national minority, property, birth, disability, age or sexual orientation” [13]. That kind of discrimination is often linked with political extremism because political parties or movements exploit such prejudices.

When we address the issue of racism, we need to differentiate between active and passive racism. Active racism is openly expressing pejorative comments about racial groups in order to subjugate them. What also should be kept in mind is passive racism because it is much more hidden. It includes beliefs, attitudes, and actions that maintain a racist system although there is no advocacy for violence, yet forms of psychological and emotional violence are clearly in play. Such a passive racist attitude can be conscious or unconscious and includes laughing at racist jokes or remaining silent when one sees racist actions.

While racism is widespread around the world and in all countries and citizens seem to be affected by it to a lesser or greater degree, it is still extremism following the definition of archbishop Tutu: It does not allow space to hear another opinion other than one’s own. More importantly, it does not respect the dignity of the other or honor their humanity.

In the case of sexism, it is often deeply rooted in many societies around the world. While it affects any gender, it is particular to women and girls who do not have equal opportunities as do men and boys and who are often treated in inferior ways. Equal freedom and being encouraged to gain personal fulfillment are basic demands of feminists that are fiercely rejected in some parts of the world.

Yet it is clear that women earn less wages than men, are more likely to have jobs where they cannot advance and they spend much more time in domestic activities [14]. Sexual violence is the extreme form of how sexism expresses itself, degrading women to a sexual object and not allowing her voice and choices to be heard. The fact that 35% of women worldwide have suffered at one point from sexual violence [15], points to how normal and ordinary extreme forms of sexism have become today.

In comparison to mainstream religions, sectarian groups follow a more particular reading of the sacred texts, usually in tension with the rest of society. According to Liebman, it is particularly the reach of those groups not only into the private realm but also the public one that makes those sects extremist [16]. At the same time, religious extremists isolate themselves from mainstream society and try to reject the values that are interpreted as alien to the own religious traditions. In the 21st Century, such a position is difficult to uphold, but religious extremist groups have their own media outlets like newspapers, radio and television stations as well as social media that allows for a high degree of control of their followers.

While all religious groups attempt to provide public goods for their members, it is even more important for extremist sectarian groups to do so because it justifies the sacrifices their members need to make and accept the prohibitions that help define the group. Examples are Hezbollah, ultra-orthodox Jews or some U.S. Christian groups that have successfully engaged in “good” activities like schools, health care and social services [17]. Extremist groups do that in their own best interest because it is connected to the hope of gaining more followers and keeping those already within their network.

Religious extremists usually cause no direct harm to society but it is becoming problematic when the state suppresses religion because it often leads to the radicalization of those groups and can eventually turn them to violence [18]. Thus, “to equate religious extremism with religious militancy is a serious error (and, in many instances, a political ploy)” [18]. It is therefore religious freedom that is key for reducing the risk of radicalizing sects to violence.

Sometimes, the pressure of turning to violent extremism can also come from within, as the example of Hamas demonstrates. Hamas existed for decades as the Muslim Brotherhood in Palestine, and followed a non-violent agenda that stressed personal piety and political Islam. It was not until the First Intifada in 1987 when secular nationalists seemed to undermine the support of Hamas that they switched to a more violence oriented theology, finding in the Quran justification for this radical thinking. It is a clear example of how the most sacred texts for a group can be reinterpreted in a short time span to adjust to and attempt to improve upon their standing with their constituents [18].

Yet, religious extremism can be fostered or sponsored by the state or political parties. An example is Indonesia where Sharia Law plays an ever increasing role, despite the multicultural tradition over many centuries [19]. Another example is the concept of Hindutva, a right-wing Hindu nationalist ideology in India that promotes the idea that Muslims and Christians are not part on the Indian sub-continent and only became part of India when they “assimilate” themselves to the Hindu culture [20].