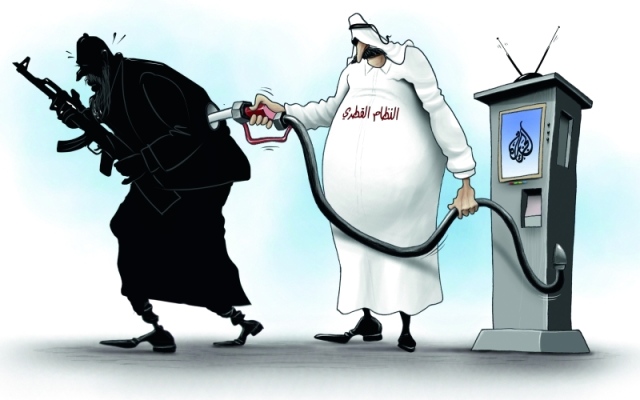 The Role of Qatari Media Al-Jazeera, Qatar’s mouthpiece in the Middle East

The Role of Qatari Media “Al-Jazeera, Qatar’s mouthpiece in the Middle East”

Cairo – No one can deny the vital role played by Al-Jazeera satellite channels during the Arab Spring revolutions, especially in Tunisia, Egypt and Libya. Therefore, it was only natural that Al-Jazeera, which is owned by the Qatari ruling royal family, was merely an effective tool for implementing the foreign policy of Qatar as vested in its Emir Sheikh Hamad Bin Khalifa Al Thani. Al-Jazeera Network was established in April 1996, with the support of the Government of Qatar, with a budget exceeding 150 million riyals.

It is relevant and necessary to talk here, in some detail, about Al-Jazeera, as a model of the great overlap and confusion between the state and media apparatus. Several experts have posited that Al-Jazeera stands in a cloudy and dodgy area in between state-run media and independent media, which necessarily reflects and influences the manner of dealing with terrorism-related issues and the kind of stances on other issues.

The Boston-based Christian Science Monitor (CSM) once published an interesting investigative report focusing on the role played by the State of Qatar and Al-Jazeera, and how the small Gulf State resorted to using clerics for executing its foreign policy.

The report shows that Qatar’s interest in media has grown following the palace coup d’état staged by Sheikh Hamad bin Khalifa al-Thani to overthrow his father Sheikh Khalifa, who ruled the country since 1972.

In fact, it is an old story. After dislodging his father from power, Sheikh Hamad bin Khalifa Al Thani seized power in what is described as “bloodless palace coup d’état” in 1995.

Immediately after, the Emir of Qatar, Bin Khalifa had founded the news media group, Al Jazeera. He also made Qatar a safe haven for some Salafist hardline preachers, showering them with generous funding through newly-minted credit cards. His main target was that those preachers would reach out to the 1.5 billion Muslims worldwide as they had all the resources at their disposal such as the media platform and the money. However, one might ask what was the price for that? The price was “silence.” While those preachers were free to talk about the situations in the Middle East in general, particularly provoking popular outrage in Egypt and Libya, they had a role to play, that is, to keep the revolutionary tide outside the borders of Qatar. Otherwise, the media platform would stop, and financial support would be cut off immediately. In other words, either toe the line, or suffer the consequences.

One of the first decisions taken by the new Emir [(now former) Sheikh Hamad bin Khalifa Al Thani], at the state affairs level, was the cancellation of the Ministry of Information on the pretext that the government should not own or manage the media; as put by Qatar’s Foreign Minister Sheikh Hamad bin Jassem, who became the star of the new political phase in Hamad’s government. However, it is strange that two years after the decision to literally liberate the Qatari media from the grip of the state, no governmental media outlet has been practically liberated. Rather, Qatar expanded its authority, specifically that of the Ministry of Foreign Affairs, which extended its role and was tasked with running the Qatar News Agency (QNA). Additionally, a new license was given for the publication of a newspaper called Al-Watan, a new television station called Al-Jazeera, and a number of media outlets wholly or partly owned by the ministry abroad, including the daily Al-Quds and the weekly “Al-Mushahid Assiyasi”, both are London-based.

The new Emir’s attention to the foreign media resulted in a sharp dispute with his poor neighbor, Bahrain, over Al-Jazeera.  In May 2000, Bahrain banned Al Jazeera broadcast due to the channel’s comments about Bahrain’s municipal elections, labeling it as “serving Zionism”. This dispute almost reached the stage of military confrontation and the Qatari-Bahrini relationship was almost a political rupture. The two countries launched media counter-campaigns against each other, in which Qatar used its new weapon, the nascent station “Al Jazeera”, to defame and disgrace the Kingdom of Bahrain.

It is of paramount importance to understand the nature of the relationship between the owner, the Qatari government, and the owned, i.e. Al Jazeera Media Network is wholly and officially owned by the Qatari government and is funded by an annual budget of more than $100 million dollars. In early 2006, the Qatari government announced that it would sell shares of the channel in the international stock market; however, it later retracted the idea and kept it as part of its Foreign Ministry.

The role played by “Al Jazeera” has sparked controversy about the real ulterior motives of the channel and the nature of its political leanings and orientations. Officially, the channel has been the enemy of most Arab governments, accused of encouraging opposition, on the one hand, and offending rulers and leaders, on the other. Some Al-Jazeera bureaus in a number of Arab capitals were temporarily shut down on charges of broadcasting malicious information or spreading false news.

Notably, Al-Jazeera’s policy of opening up to Israel, which indirectly served to achieve a degree of the popularly-rejected notion of normalization with Israel, has also emerged as one of its salient hallmarks over the course of its operation. The fact of the matter is that Al-Jazeera is no more than a propaganda tool to promote the Qatari government’s domestic and foreign policy as well as to “gild” its image abroad in line with the desire of Qatari leaders to play a role in the regional and international political arena outside its limited borders.

Qatar’s government manipulates Al-Jazeera coverage to suit political interests. This was best substantiated by one of Al-Jazeera’s media moguls who spoke of the reasons why it was called as “Al-Jazeera”. The name was given to confirm that the “station manifests in itself the state-let of Qatar, in miniature.” When this was adopted as a name for the station, it surprised its managers, who came all the way from London after the closure of the BBC Arabic (1996), since the name does not reflect any media sense.

At the end of the day, Al-Jazeera’s media role has always been closely related to the political ends of its owner. It is not possible to understand Al-Jazeera’s scope of work without knowing the political background of its sole owner, i.e. the Qatari government. It is clear to everyone that by dint of Al-Jazeera, Qatar just wants to play a role in the region, and has harnessed it to settle scores with its adversaries, Saudi Arabia, the United Arab Emirates and Egypt, and in favor of shifting alliances with Syria, Hezbollah, Iran and Hamas.

This is exactly what Egyptian-born American scholar Dr. Mamoun Fandy said in his article: “Please Do Not Call!” (Released in Arabic[1]), in which he questions the credibility and fairness of Al-Jazeera channel and accuses it of promoting and hawking the illusion. He says: “Those who buy and defend the so-called project of freedom and democracy in Qatar are naïve. They are living in an absolutist state where one person would determines who should or should not appear on Al-Jazeera.”

Fandy adds: “You [Al-Jazeera folks] are operating a satellite channel that does not bring news to viewers, but it broadcast “the news and videotapes,” I mean, video messages of terrorists such as Osama bin Laden, Hassan Nasrallah, and Hamas’s pre-prepared videotapes.”

Similarly, in his 2007 book (Un)Civil War of Words: Media and Politics in the Arab World, Fandy called Al-Jazeera “the Muslim Brotherhood channel,” noting that it glorified Muslim Brotherhood founder Hassan El-Banna in a two-part documentary in 2006.

In fact, the accelerated evolution of Al-Jazeera’s media policy which has been characterized by disseminating and promoting radical and extremist ideas and its absolute support to the outlawed Muslim Brotherhood has emerged clearly after the so-called “Arab spring” uprisings.

Egyptian Journalist and Member of Parliament, Dr. Abdel Rehim Ali is an expert on Islamist Movements and political Islam. This essay is adapted from his upcoming book “Qatar: The Destabilizer of the Middle East: The Full Story of Grand Conspiracy,” which will be published later this month.