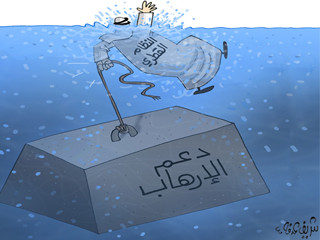 Cairo – Saudi Ambassador to Egypt Ahmed bin Abdul Aziz Qattan has said that the Custodian of the Two Holy Mosques, King Salman bin Abdulaziz of Saudi Arabia, is keen to strengthen cooperation between Saudi Arabia and all the countries of the world.

Ambassador Qattan, who is also his country’s Permanent Representative to the Arab League and the Dean of the Arab Diplomatic Corps accredited to the host country of Egypt, currently leading the kingdom’s delegation to the 148th session of the Arab foreign ministers in Cairo, added that Saudi Arabia is keen on the unity and sovereignty of Yemen, Syria, Iraq and Libya.

Qattan said that he considered the actions taken by Saudi Arabia, the United Arab Emirates, Bahrain and Egypt against Qatar are sovereign measures, due to the wrong policies of the Qatari government over many years which supported and financed terrorism and hosting those involved in terrorism on its soil, spreading hatred and interfering in the internal affairs of other states.

“We have had to take these measures for the benefit of Qatar on one hand and our security and stability on the other,” he said, citing that the Qatari actions have been condemned internationally.

“The four countries will continue to adhere to these demands until Qatar responds,” he said. “Unfortunately, Qatar has given its first hope to end the crisis, after the telephone call between Crown Prince Mohammed bin Salman, Deputy Premier and Minister of Defence, and the Amir of Qatar, who made the call, whereby Qatar evaded and distorted the reality of the contents of the telephone call that took place.”

He added, “Dialogue with Qatar will remain suspended until it makes it position clear, publicly, showing its willingness for the process. What Qatar has done reinforced the fact that they are unwilling to enter into dialogue.”

On Qatar’s rapprochement with Iran, Qattan explained that “this is a sovereign decision, but the embrace in the arms of the Iranians and others will only lead to destruction and will have a negative effect on them”.

“Everyone, especially in the GCC states, recognises the destructive Iranian role which is the interference in internal affairs and destabilisation and security in GCC states. No country, that has dealt with Iran, achieved good from it. If the Qatari regime thinks that it has an interest in rapprochement with Iran, the coming days will prove that this is not good at a time when the Qatari people themselves will not accept that Iran will have a role in their country.”

The UAE has affirmed that the joint measures it has taken, along with Saudi Arabia, Bahrain and Egypt, came after a long patience and after Qatar dishonoured the agreements it signed, said Dr Anwar bin Mohammed Gargash, Minister of State for Foreign Affairs.

Addressing the 148th session of the Arab League Council in Cairo, on Tuesday, Dr Gargash said the measures were not aimed at the sovereignty of Qatar, but at mitigating the damage on the four countries and on the region’s stability.

“It is important that the approach of supporting terrorism and extremism and interfering in our and other Arab countries’ affairs changes. We will continue our measures against Qatar until that approach is changed and until we ensure that we are safe from such hostile policies. The solution, however, is not in escalation, but in a political framework for a dialogue that responds to the 13 demands (made by the four countries),” he added.

Dr Gargash referred to Iran and its allies’ continuous interference in the Arab countries’ affairs and their continuous support to the extremist and sectarian groups in a number of Arab countries.

He renewed UAE’s call to Iran to reach a peaceful solution that ends its occupation of the UAE’s three islands of Greater Tunb, Lesser Tunb and Abu Musa, either through direct negotiations or by referring the issue to arbitration, in line with the UN charter and the international law.

Dr Gargash also referred to the expanding phenomenon of terrorism in the Arab world, saying the conflicts in the region are fuelled by those who dislike peace and who dedicate their resources to supporting extremism, terrorism and sectarianism.

On the Palestinian question, Dr Gargash expressed rejection of Israel’s attempts to change the legal and historical status of Occupied Jerusalem, in clear violation of the international legitimacy.

On Yemen, he said the UAE believes in the importance of full commitment to supporting legitimacy, maintaining Yemen’s unity and sovereignty and rejecting interference in its internal affairs.

He also emphasised the importance of political solution in Yemen on the basis of the GCC initiative, the outcome of the Yemeni national dialogue and the international resolutions, including the Security Council’s resolution 2216.

Dr Gargash also stressed the need to contain the Syrian crisis and to eliminate the terrorist and extremist groups, there, particularly Daesh. He renewed UAE’s support to the UN efforts to hold talks among the different parties involved in the Syrian crisis.

He also renewed UAE’s support to Iraq in its war against Daesh. He praised the sacrifices made by the Iraqi people, backed by the international coalition forces.

On the developments in Libya, he explained the UAE’s position in support of all regional and international efforts to achieve national unity and stability. He welcomed the efforts of Ghassan Salama, the new UN envoy to Libya.

Dr Gargash commended the efforts made by Saudi Arabia to successfully organise Haj this year by providing all facilities to the pilgrims.