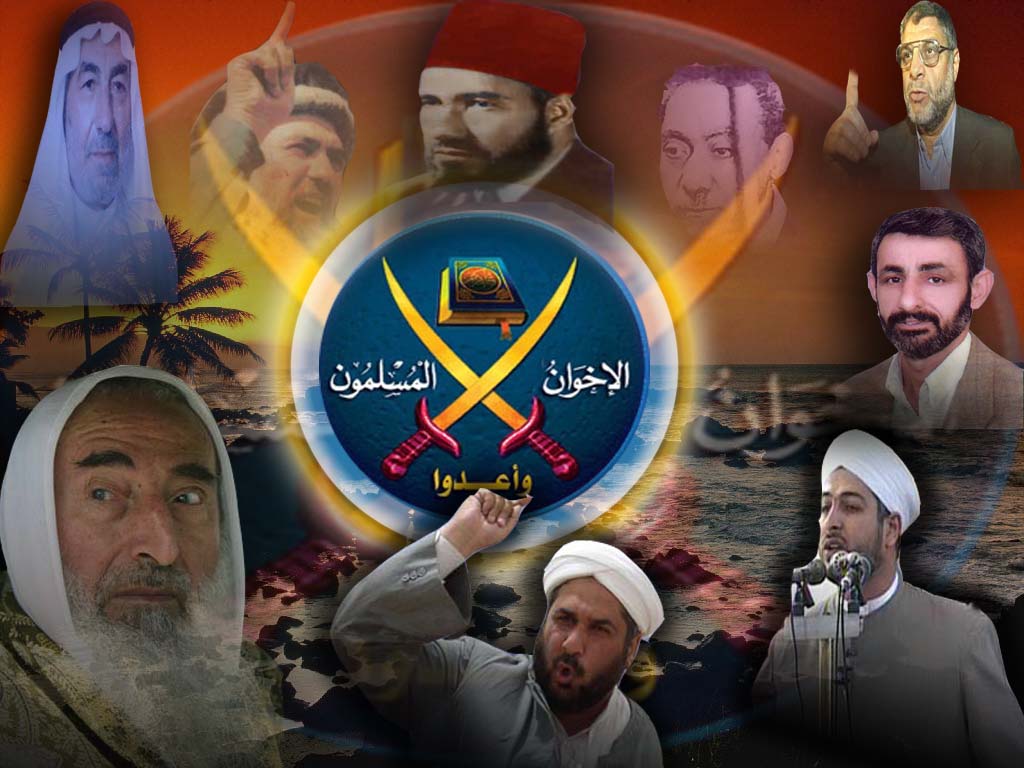 Muslim Brotherhood: Agent of Terror in the Middle East (5)

NOT BROTHERS AND NOT MUSLIMS:

In a protest against the decision to dissolve the Brotherhood, the Private Entity set up a plan to assassinate Mohamed Fahmy El Nokrashy Pasha, the then Prime Minister and the Minister of Interior.  On December 28, 1948, Brotherhood member Abdel Megeed Ahmed Hassan, disguised in police uniform, approached the Prime Minister and shot him dead three times.  A few hours later, the Brotherhood’s Guide Hassan El Banna issued a statement with the heading, “Not Brothers and Not Muslim.” Some of his close circles claim that the statement was written two days prior to the shooting.  The statement read, “Incidents have occurred that were attributed to members of the Brotherhood who failed to realize the essence of its philosophy.  The decision to dissolve the Brotherhood was followed by the heinous murder of Prime Minister Mahmoud Fahmy El Nokrashy Pasha.   The country now mourns the loss of a great leader who is a symbol of patriotism and integrity and we are as equally sorry to lose him.”

Strangely, after the accused revealed his connection to the Brotherhood, he insisted that he carried out the shooting on his own accord. Yet, after hearing the Supreme Guide’s statement, he changed his testimony and confessed the Brotherhood’s involvement in the murder.  Some argue that this confession was given after the accused was threatened and tortured.  However, 40 years later, Mahmoud El Sabbagh writes that the murder of El Nokrashy was necessary for the protection of the Brotherhood after his decision to dissolve it.  He adds, “Sayed Fayez, who was in charge of the Private Entity back then formed a group including Mohamed Malek, Shafiq Anas, Atef Atteya Helmy, Officer Ahmed Fouad, Abdel Megeed Ahmed Hassan and Mahmoud Kamel to plan for the assassination.” El Sabbagh then proudly boasts, “Abdel Megeed Ahmed Hassan succeeded in killing El Nokrashy in the center of his power and amongst his soldiers and guards while entering the elevator of the Ministry of Interior.”[1]

After the death of El Nokrashy, the Brotherhood did not stop and saw that Ibrahim Pasha Abdel Hady as an extension of El Nokrashy. And so, the Brotherhood Jihadists – as El Sabbagh describes them – decide to assassinate Ibrahim Pasha.  Sure enough, on May 5, 1949, on the way to the Council of Ministers, they opened fire injuring passersby as well as the procession which they thought belonged to Ibrahim Pasha.  However, it was the procession of Hamed Gouda, Head of the House of Representatives, who escaped unharmed.  After the perpetrators were caught, they were sent to trial that extended till the onset of the July revolution. Later, they were regarded as heroes of liberation and all charges were dropped.[2]

THE ASSASSINATION OF SAYED FAYEZ:

After El Banna appointed Sayed Fayez as Head of the Private Entity instead of Abdel Rahman El Sanady, the latter decided to assassinate his brother who came to replace him.  He sent Fayez a box of sweets which promptly exploded when Fayez tried to open it, killing both him and his brother instantly.  When the news reached El Banna, he vehemently denied that the perpetrator was a Muslim Brotherhood member, and, as always, accused the Brotherhood’s enemies of carrying out the crime to frame the Brotherhood.  Yet once more, time passes and El Banna is proven to be a liar again.

This time, Brotherhood’s historian and one of its most prominent leaders Mahmoud Abdel Halim says, “El Sandy knew that Eng. Sayed Fayez detested his actions and that he offered his services to El Banna to replace him in leading operations in Cairo at least. Fayez had also established strong relationships with the Brotherhood’s members in Cairo and managed to convince them of his capabilities.  To El Sanady, this was a call for war and so he decided to get rid of Sayed Fayez.”

“He got rid of him in the cruelest, most inhumane way.  He seized the opportunity of our Honorable Prophet’s birthday and sent him a closed box.  Sayed was not at home then, but, upon his arrival, he opened the box which exploded and killed him and his brother.  The rest of the family was injured and one of the walls was demolished.  It was proven beyond a doubt that El Sandy arranged for the murder, as El Sandy himself confessed to it after being interrogated by the Brotherhood’s leaders.”

Can you see what the Brotherhood’s philosophy does to its own members?

THE REVOLUTION, THE MUSLIM BROTHERHOOD, AND VIOLENCE:

Before starting his tour to several Arab countries at the start of July 1954, the Supreme Guide formed a commanding committee to confront the government’s position on the Brotherhood. The members of the committee were cause for surprise, as it included Youssef Talaat (Head of the Private Entity), Salah Shady (Private Entity Supervisor and Head of the Units Department which is also a secret entity), Sheikh Farghaly (owner of a popular artillery store in Ismailia) and Mahmoud Abdo (one of the most involved members in the previous Private Entity)[3]

So what did the 2nd guide want? What was he planning for? The Brotherhood still claimed that the Private Entity was established to fight the occupation, yet it was absent during the armed war of 1954.  The then Supreme Guide El Hodaiby even absolved the Brotherhood from taking part saying, “Everyone is wondering about the position of the Brotherhood, as if all Egyptians except the Brotherhood rushed to fight the British.  No one tried to understand why we chose to slow down a bit. The fight this time was useless and futile and yet there were those who chose to take part.  However, we are still committed to future battles honoring the word of God.” [4]

We wish that Dr. Mohamed Badei would examine these words carefully before filling our ears with his claims that the Private Entity was founded to fight the British occupation in the Canal.

The Brotherhood had reached a dead end with late President Gamal Abdel Nasser.  After reorganizing the Private Entity as mentioned earlier, they decided to get rid of Abdel Nasser.  On February 26, 1954, on the occasion of signing the Evacuation Agreement, Abdel Nasser stood in Mansheya Square to give a speech. Midway through the speech, one of the leaders of the Private Entity, Mahmoud Abdel Latif, fired eight shots in the direction of the president.  Two people were injured but the president was unharmed.  Till this day, the Brotherhood still insist that the incident was an act staged by the government to get rid of them.  However, during the trial that was broadcast live, the accused confessed to the role of the Brotherhood in the attempted murder.  The Brotherhood questioned the impartiality of the trial, yet, they never commented on the confessions of the accused who took pride in their crime, boasting about the intricate planning and supervision of the Brotherhood.

On October 30, 1965, the State Security Prosecution was notified that the dissolved Muslim Brotherhood was rearranging its organization with the aim of assassinating several officials to be followed by the bombing of vital entities across the country to overthrow the government.  The movement was lead by Sayyid Qutb and included all parts of Egypt.

Sayyid Qutb had just been released following a recommendation by Iraqi President Abdel Karim Kassem during his visit to Cairo in 1965.  However, Qutb had already reached the conclusion that a government that sanctions so much torture in its prison is a government of infidels and atheists.  And so, Qutb planned his retribution that included the heads of state, to pave the way to overthrowing the government.

The case was discovered accidently when the military police reported the arrest of a soldier negotiating an arms deal with one of his colleagues in Alexandria.  Both were promptly arrested and they confessed that the weapons were for a number of Muslim Brotherhood leaders.  The confessions continued and the accused were sent to trail where Sayyid Qutb and six of his colleagues were sentenced to death while 36 other Muslim Brotherhood members including Dr. Mohamed Badei, the 8th Supreme Guide and his deputy Mahmoud Ezzat were given a prison sentence.  Both Badei and Ezzat are now promoting the writings of Qutb and reviving his philosophy even though the Brotherhood had previously denounced this philosophy in Hassan El Hodaiby’s book “Advocates not Judges”.[5]

When late President Anwar El Sadat came to power he pardoned the Brotherhood leaders and agreed with them to not get involved in politics again.  However, they swiftly recruited many youths who believed in Sayyid Qutb’s jihadist philosophy in yet another attempt to seize power from the late president.   This, later on, came to be known as the “Military Academy Trial.”  One of the Brotherhood’s leaders Talal Al Ansary was sentenced to death but then the sentence was reduced to life, as disclosed in his book, “Unknown Pages from the History of Contemporary Islamic Movement – from the Setback to the Gallows”, which says that they formed a secret division in Alexandria in 1968.  The division remained intact till the Brotherhood leaders were released from prison. He got to know Zeinab El Ghazaly who introduced him to Saleh Sariya, the Iraqi Muslim Brotherhood member.  Along with his followers, Sariya offered to join forces with the Brotherhood to form a new military wing.  After his approval, Zeinab El Ghazaly arranged for meeting with the then Supreme Guide Hassan El Hodaiby (1972) at his house in the district of Manial in Cairo.

“El Ansary was in awe of the Supreme Guide who remained completely silent.  Sheikh Ali eagerly addressed the Supreme Guide expressing his admiration of the Brotherhood’s youth movement in Alexandria and introduced him to Ansary as the leader of the movement.  He kept explaining how much the youth admired the Brotherhood and their willingness to do anything to bring it back to public life.  Ansary was then sworn in as the newest addition to the Brotherhood and he pledged his loyalty.  The Supreme Guide’s tears were trickling and he hugged Ansary tightly.  Sheikh Ali too was crying.  The meeting did not last long, Sheikh Ali then left shortly followed by Ansary[6].

According to Al Ansary, “Saleh clearly spoke his mind to the Muslim Brotherhood leaders led by the Guide. As Saleh told his followers, he wrote a five page memo to the Guide detailing his plan to renew the Brotherhood’s philosophy so that gaining power through military force becomes a vital option.  Saleh also told his followers that the Guide approved the contents of the memo.”[8]

Al Ansary continues, “Surely the Muslim Brotherhood in Egypt knew all about Saleh Sariya’s history and his tendency to revolt but they embraced and supported him in Egypt regardless.  Most importantly, during a meeting held at Zeinab El Ghazaly’s residence, they introduced him to their only group of youth at the time.  These points were not tackled before because no one presented these facts and their historians and authors went to great lengths to keep them hidden.  But the truth is, Dr. Saleh Abdalla Sariya led the first secret Muslim Brotherhood unit and openly pledged his loyalty to El Hodaiby.”[9]

[4] From an interview published in El Masry Newspaper on January 3rd, 1953

[6] Talal El Ansary – Unknown Pages from the History of Contemporary Islamic Movement – from the Setback to the Gallows. Page 40. Al Mahrousa. 1sr Edition 2006