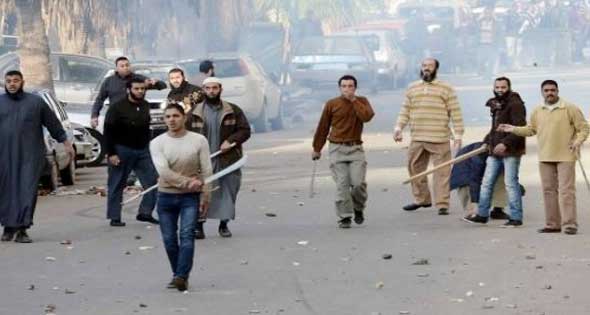 Muslim Brotherhood: Agent of Terror in the Middle East (4)

THE BROTHERHOOD: ASSASSINATION OF JUDGES:

AL KHAZINDAR IN THE PAST TENSE:

“Judge Ahmed Bek Al Khazindar, Head of the Cairo Court of Appeal approved the legitimacy of the British presence in Egypt under the 1936 treaty.  Our youths saw him as a major obstacle for they had dreams of jihad and liberation.  A few of us volunteered to get rid of him and someone was chosen, so I used to read the papers every morning looking for the news.  Days passed and I never read the news I wanted to see, so I asked why is it taking so long? They replied saying they cannot locate his address because he was recently transferred from Alexandria and his address was not listed.  Finally, they found out that he was living in Helwan.”

Adel continues saying: “I kept looking for the news till March 22, 1948.  I was at work in Al Ahly Bank when one of the foreign employees yelled to freeze Ahmed Bek Al Khazindar’s account.  He was asked why and he answered because he was shot dead.   Everyone regarded the news as simply an accident.  His account would be frozen till his inheritors each get their share, but to me, it meant a lot more than that.  As soon as I finished work, I rushed to make sure of what happened.   Unfortunately, I found out that the two from the Brotherhood who killed him were arrested.”

HOW WAS AL KHAZINDAR KILLED?

Under this title, Adel tells the full story’ as follows:

“Hassan Abdel Hafez and Mahmoud Sayed were chosen to hunt him down.  We followed him for several days and found out that he uses public transportation and more often than not, he goes to the railway station on foot.  We also discovered that the Helwan police station does not own any cars and so we devised our plan accordingly.  They will wait for him to leave home then Hassan will shoot him, while Mahmoud stands on guard.  Once accomplished, Mahmoud is to use voice grenades to prevent anyone from following them then they will escape while shooting in the air and throwing bombs targeting Abdel Rahman’s house. (Note how intricately the Brotherhood plan for their crimes and yet their leaders still insist that the Brotherhood has never used violence).

“Early morning, the two hunters were waiting for him to leave home.  Indeed he leaves and walks confidently not knowing what would become of him.  Mahmoud was a bit far, watching the road as Hassan approached and fired around three shots that missed the target.  Mahmoud, who was a well-built wrestler, seized the opportunity and rushed to Al Khazindar and knocked him to the ground.  He then shot him many times then left him and ran with his colleague.  His wife kept crying from the window, “Haven’t I told you, Ahmed?” (Meaning ‘haven’t I warned you?’)

A nearby shop owner heard the shots and the cries so he alerted the police.  And here came the surprise; the police station that owned no cars had just received a car from Cairo, and the chase began.

The situation changes forcing Mahmoud and Hassan to escape to the mountain instead of going to a house in Helwan.  El Moqattam Mountain is not a suitable escape route, Hassan fell spraining his ankle so Mahmoud had to help him up for some time.  Soon enough, the whole mountain was surrounded by police officers and the two were promptly arrested.  Attorney General Mahmoud Mansour carried out the interrogation that night in Helwan police station.  They denied any relation to the crime so they were transferred to Cairo.  The next day, I found myself amongst a group of judges attending the funeral of Al Khazindar in Sharkas Mosque.”[1]

“The investigation and the trial took a long time. Hassan pretended to have a mental illness and was transferred to the psychiatric hospital in Abbaseya.  Several reports were submitted on his illness and the extent of his criminal responsibility.

The defense used all arguments to keep postponing the case.  It is known that controversial issues tend to fade away by time and that is exactly what the defense was trying to do.  (Note how the Brotherhood plan was to escape justice).  While stating his defense, lawyer Fathy Radwan, said, “…Let us assume they did kill him.  What is their motive?”  But finally, on November 22, 1948, Mahmoud Zeinhom and Hassan Abdel Hafez were sentenced to life in prison with hard labor.”

HELPING THE INMATES TO BREAK OUT OF JAIL:

Adel Kamal continues to detail the Brotherhood’s plan to get the convicted members out of prison:

“The Al Khazindar operation caused us a great deal of stress and we were concerned about Mahmoud Zeinhom and Hassan Abdel Hafez.  We not only hired the best lawyers to defend them, we were also planning to smuggle them out of prison.

We calculated all the details of the operation, the prison buildings, their entrances and exits and we prepared all the tools needed for breaking in.  A group was selected for the break in and underwent extensive training on the use of small machine guns and pistols. The prison guards were armed with old guns that are loaded one bullet at a time. Some prison guards were bribed and spare keys for prison cells were made.  The getaway car, needed to smuggle them out, was ready and so was the place where the convicts would go into hiding.  The electric system was studied carefully to prepare for a power cut during the break in.  Everything was going as planned.

But the jeep, being driven, crashed, and the 1948 ordeal, and the arrest of some of the members nominated for the operation ruined the plan.  Even the prison spare key fell in the car without anyone noticing it.  None of the police officers, prosecutors or investigators noticed that the key to Egypt’s main prison was inside the jeep.  Surely they saw the key; they just did not make the connection. And so, Mahmoud Zeinhom and Hassan Abdel Hafez remained in prison for five or six years, but when the revolution erupted they were released.[2]

BOMBING THE COURT OF APPEALS:

This operation was planned by the prominent leaders of the Private Entity.  The aim was to bomb the Cairo Court of Appeal because all documents pertaining to the “Jeep Trial” where Mostafa Mashhour was the main suspect (a leader of the Private Entity and the 5th Guide from 1996 to 2002).  The story of the jeep is well known; Mostafa Mashhour was arrested driving a jeep filled with weapons and explosives that the Private Entity used for training, in addition to documents containing the future plans and strategies of the Brotherhood.  El Banna denied that any Muslim Brotherhood could do such a thing, but years passed, unveiling the truth El Banna wanted to conceal.  About this incident, Mahmoud El Sabbagh says, “Sayed Fayez reviewed all the crimes the government is accusing the Brotherhood of and was certain that the government had forged the documents presented to the prosecutor to build their case.  He decided to burn the documents and assigned brother Shafiq Anas for the case.  Shafiq Anas succeeded in placing a bag full of explosives besides the cupboard but a policeman saw Shafiq leave the bag so he picked it up and ran after Shafiq who continued running to prevent the bomb from exploding in the court’s stairwell.  When he got out, he alerted the policeman to the bomb so he left it and it exploded without causing any damage.  Shafiq was later arrested.[3]

On February 24, 1948, Ahmed Pasha Maher was on his way to the parliament.  While crossing the hall, a young man named Mahmoud El Essawy, shot and killed him instantly.

Since Essawy was a Brotherhood member, following the incident, Hassan El Banna, Ahmed El Sokary, Abdel Hakim Abdin and other Muslim Brotherhood members were also arrested.  However, they were released a few days later after Essawy confessed that he belongs to the National Party. But, there are those who insist that Essawy’s confession was given only to save his Brotherhood from trouble.

El Sabbagh, who was a member of the Private Entity then says that Ahmed Maher was a traitor, however, the Brotherhood did not approve of killing him.  Yet, this did not prevent them from plotting to kill him if matters escalated.  El Sabbagh personally said that he was in charge of the plan. [5]