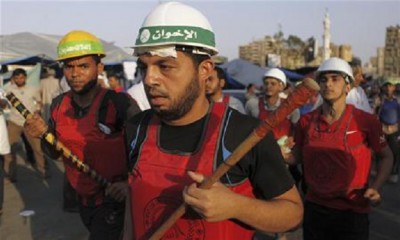 Muslim Brotherhood: Agent of Terror in the Middle East (3)

THE BROTHERHOOD: ASSASSINATION OF JUDGES:

Even the justice system was not safe from the crimes of the Brotherhood. In an attempt to strike fear into the spectrum of judges, the Brotherhood targeted and killed several judge throughout its bloody history, such as Judge Ahmed Bek Al Khazindar, Deputy of Cairo Court of Appeals, who had condemned some members of the Brotherhood for crimes they committed using explosives.

As the light of truth can never be dimmed, we will start with the testimony of Dr. Abdel Aziz Kamel who attended what came to be called the “Abdel Rahman Al Sandy Trial” following the assassination of Al Khazindar.  In his book “In the River of Life”, he offered his testimony on the trial.

Under the title “The Blood of Al Khazindar” Kamel dedicated a whole chapter saying:

“That morning (referring to the day Judge Al Khazindar was killed on March 22, 1948), Judge Ahmed Bek Al Khazindar was leaving his home in the district of Helwan on his way to work when he was approached by two Brotherhood youths who shot him dead.  Both Mahmoud Zeinhom and Hassan Abdel Hafez were arrested.

The incident had a profound effect as it brought to mind the myriad of previous decisions which Al Khazindar took against some of Brotherhood’s youths for assaulting British soldiers in Alexandria.  Both youths were sentenced to life with hard labor on November 22, 1947, but were later released due to insufficient evidence.  Al Khazindar was not popular and he was known for his strong opposition to the Brotherhood.  They regarded what they were doing as patriotic and religious, while they viewed Al Khazindar as strict and unjust.

I do not want to mention all the incidents here.  Rather, I want to document a private session I attended at the General Center for the Muslim Brotherhood chaired by Mr. El Banna along with other members of the Private Entity.

I hereby document all what I recall of the events of this distant night.

We will see how the mind completely alters and rephrases scenes, how narrators tell vividly conflicting stories with full conviction that this is the truth.  This is the rationale behind having to have four witnesses to prove something true in the Brotherhood’s thought.

In the spring of 1948, I was a teacher at Asyut’s Teacher’s Institute.  Following the assassination of Al Khazindar, I received an invitation for an urgent meeting with the Supreme Guide in Cairo.  I never missed a day of work so I had to ask the dean of the institute, Mr. Abdel Salama, for permission to leave.  He stared at me for a long time but eventually gave me permission without asking for reasons.  I could not specify how many days I would be off so he said to me “get back soon” and simply bid me farewell.

The dean instinctively knew it was related to the Brotherhood, after the death of Al Khazindar.  Everyone was talking about it, judges, lawyers and teachers.  There were many opinions but all of them condemned the Brotherhood and denounced the blatant aggression against the judiciary.

My arrival to Cairo surprised everyone including my mother and my siblings.  I remained quiet and headed to the General Center.

The meeting was held at the library on the second floor.  Most of the contents of the library were donated by His Royal Highness Prince Mohamed Ali Tawfiq, the then Crown Prince.  This was my favorite room in the building, I spent many hours here reading, researching or talking to members of the Families Department.

This was a special meeting, perhaps one of the most intense meetings that had a great impact on me.  I can still remember Mr. Hassan El Banna and the way he sat looking anxious and grim.  Next to him were the leaders of the Private Entity; Abdel Rahman El Sandy, the leader of the entity looking equally anxious then Ahmed Hussien, Mahmoud El Sabbagh, Sayed Fayez, Ahmed Zaki, Ibrahim El Tayeb, Youssef Talaat, Helmy Abdel Megeed, Hosni Abdel Baky, Sayed Sabek, Saleh Othman, Ahmed Hegazy, Mostafa Moshhour and Mahmoud Assaf.

The death of Al Khazindar was the meeting’s theme of discussion.

El Banna said that all the comments he made regarding Al Khazindar’s ruling in Brotherhood trials, were comments as: “May God rid us of him”, “I wish we could get rid of him” or “If only someone could kill him for us”,  were nothing more than wishful thinking.  He never commanded anyone to carry out the murder.  However, Abdel Rahman El Sandy mistook the wishes as orders and carried out his plan, surprising everyone, even El Banna himself was taken aback by the Khazindar’s assassination.

My friend Mokhtar Abdel Alim told me that in the night of the assassination, El Banna blundered with his prayer recitation, which had never happened before.

I also heard that El Banna was seen sitting alone depressed and lost in thought.  He could not conceal his pain and disgust owing to the incident.

I do not recall Mr. El Banna ever calling for such a meeting before.

It was obvious there was a huge disagreement between the Supreme Guide and Abdel Rahman.  What would key country officials think? Will it seem that Mr. El Banna ordered the killing, or will they realize that Abdel Rahman acted on his own accord? Who will bear the consequences of the heinous crime committed against the Egyptian judiciary?[1]

Sir, if you may, I need a yes-or-no answer to my questions

He allowed it, so I asked:

– Did you order Abdel Rahman to carry out this incident?

– I said: Do you have the blood of Al Khazindar on your hands?

– Who ordered you to do this?

– I said: Do you have the blood of Al Khazindar on your hands?

– I said: Who should bear the responsibility of the youths you pushed to kill Al Khazindar?

THE WISH OF THE SUPREME GUIDE IS AN ORDER:

Abdel Rahman said: When Mr. El Banna says he wishes to get rid of Al Khazindar than his wish is a command.

He decided to form a committee comprised of the leaders of the Entity so that Abdel Rahman could not act on his own accord. The Supreme Guide would have the final say, and judge according to what religion dictates.

The meeting ended and I went home.”[2]

Now let us probe into the writing of Ahmed Mortada El-Maraghy, the then Public Security Director.  This is published in his memoir titled, “Oddities from the Farouk Era and the Beginning of the Egyptian Revolution”: The memoirs of the last Minister of Interior before the revolution.

El Maraghy adduces the reasons that led the Brotherhood to take a decision to assassinate Al Khazindar under the title, “Murdering the Head of the Criminal Court” saying:

”The criminal court of Egypt was presided over by Chancellor Al Khazindar, a judge known for his integrity and honor.  The accused were Muslim Brotherhood members who were apprehended for possession of explosives and weapons. The case was brought before another chamber which received numerous death threats, if convicted.  The case kept being postponed till it settled in the chamber headed by Al Khazindar.  The defendants’ lawyers requested an adjournment, but Al Khazindar rejected the adjournment and insisted on considering the case despite receiving many death threats.  He sentenced the defendants to life imprisonment with hard labor, which, in turn, drove the Brotherhood to kill him as follows:

Chancellor Al-Khazindar left his home in Helwan on a winter morning heading to the train station to get to work.  Less than 50 meters away from his home, two young men, 19 and 18 years of age, shot him six times killing him instantly.  The young men fled to the mountain surrounding Helwan but a passerby saw them and alerted the police who chased after them.  Al-Khazindar’s wife heard the shots and knowing the threats her husband has been receiving, ran outside to see the lifeless body of her husband lying in a pool of his own blood.  She hugged her husband’s body, her screams echoing loudly across Helwan.  By virtue of my job, I rushed to the police station to attend the questioning of the two youths who were already arrested and brought there.  One was tall and big, the other short, both very calm and composed.  The prosecutor began the investigation and asked one for his name so he answered, “Why do you want to know my name?” He asked the other who answered, “Ask my colleague to tell you my name” and they both laughed.  The prosecutor brought back the order and repeated the question so they gave their names.  He asked if they had shot Chancellor Khazindar and they answered very calmly, “Who is Khazindar?” They then refused to answer any more questions so the investigation was stopped.  A police officer tried to talk to them but they laughed and did not respond.  Later the shorter man whispered something to his partner, and they kept laughing till their eyes watered.

I asked him (El Maraghy Pasha): May I know what is so funny? He smiled saying: “My friend is so funny, he always makes me laugh.” (Note the Brotherhood’s disregard for life, a result of their upbringing).  I was filled with rage.  They are killers who ended the life of an honorable judge, widowing his wife and orphaning his children but they do not care.  They do not realize the magnitude of their crime.  Not only that, they go on to mock the prosecutor and make jokes instead of answering questions.  Something here is amiss; they did not behave like sane human beings.  Could they be on drugs?”[3]

Let us leave El Maraghy’s answer lest it angers the Brotherhood, for they will leave everything and dwell on to this opinion to escalate the feud with me.  To further prove what has been said, let us see one of the Private Entity’s most prominent leaders and his view on events.

[3] Ahmed Mortada El Maraghy – Oddities from the Farouk Era and the Beginning of the Egyptian Revolution” (the memoirs of the last Minister of Interior before the revolution). Page 71-72. El Sherouk.  1st Edition. 2009