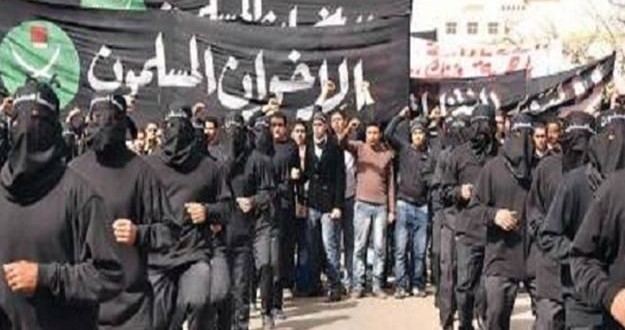 Muslim Brotherhood: Agent of Terror in the Middle East (2)

When the decision to dissolve the group was issued on December 8, 1948, it was accompanied by an explanatory memorandum giving information on some terrorist acts committed by the Brotherhood.  El Banna, the then Brotherhood’s Supreme Guide, immediately issued a response saying that “as one of the deceptions of war, it is permissible for a Muslim to mislead enemies of God in order to be able to kill them”. This went as one of El Banna’s most famous quotes. However, what El Banna failed to realize at the time was that his followers in the future will discover the truth and label him as a liar even long after he is gone.

The explanatory memorandum on the incident of bombing a number of police stations in Cairo stated: “On December 24, 1946, bomb attacks were also carried out in several locations in Cairo. Two of the Brotherhood members were arrested and submitted before the Criminal Court. One of them was convicted of felony No. 767 of 1946 in Abdin police station.”

In response to this accusation, El-Banna said: “The convicted member in the criminal case No. 767 of 1946, Abdin police station in the wake of the events of December 24, 1946, has not yet proven to be sanctioned by the Brotherhood, and no other Brotherhood members took part in the crime.  Such incidents were common at the time with the youth and their patriotic zeal that flared up during the most recent negotiations. A whole lot worse has happened in Alexandria and many youth were arrested and sentenced accordingly, but no one said they are Muslim Brotherhood members. The official authority should bear full responsibility of this unjustified action and accusation.” [1]

Forty years later, comes one of El Banna’s disciples and a member of the Private Entity to openly expose his sheer mendacity. In his aforementioned book, Mahmoud El Sabbagh also writes, “After the escalation of events, the ‘Private Entity’ had to show the government and the British that any attempt to normalize the British occupation in Egypt will not pass without an armed fight.  Accordingly, several bombs exploded in all around Cairo’s police stations on December 3rd, 1943 after 10pm. The bombs were meant to be a ‘display of power’ and armed resistance with no causalities. The terrorist operations were carried out so carefully, all after 10pm, in all police stations as: El Moski, Gamaleya, Azbakeya, Old Cairo and a police checkpoint in Salakhana.  No one was arrested for any of the bombings so the government feared more civil anger and readjusted its plans.  Later on, bombs were also planted in Abdin, El-Khalifa and Embaba police stations respectively.”[2]

The explanatory memorandum tells us another incident at a different time and place.  In 1947, the Brotherhood attempted to bomb King George Hotel in Ismailia.  The memorandum of dissolution of the Brotherhood states: “It was established in the investigation of felony No. 4726 of 1947 that a Muslim Brotherhood member planted a bomb at the King George Hotel resulting in the injury of several people as well as the death of the perpetrator.”  El Banna responded with full confidence as saying: “The perpetrator of felony No. 4726 of 1947 has been proven to be incapacitated, thus the charges against him were dropped and he is still undergoing psychiatric treatment.  What is the point in documenting such an incident in an official memorandum? Should the Muslim Brotherhood be held responsible for the actions of an incapacitated person? [El Banna wondered]” [3]

Pertaining to the same topic, we resort to another of El Banna’s disciples, namely Salah Shady, head of the Units Department.  In his book “Harvest of Life”, Shady writes, “At the Units Department, we agreed to carry out a terrorist operation inside King George Hotel and we chose Brother Refaat El-Naggar from the Aviation Department for that task.  El-Naggar was to kindle “dossier” soaked in a flammable substance, behind a certain area covered by a curtain or something in the hotel lobby, and afterwards he was to walk away from the scene.”[4]

Shady adds, “The operation was accomplished successfully, however, a British security officer appeared out of nowhere and suspected the dossier, but brother Refaat insisted on completing the operation so he held onto the explosive device preventing anyone from getting near him, come what may.[5] Unfortunately, El-Nagger was badly injured and arrested as a consequence.”  When he was convicted of the crime, Salah Shady openly confessed: “We appointed several lawyers who argued that his psychological and mental abilities exempt him from criminal responsibility.”[6] This was exactly what El Banna said in his response to the memorandum, while knowing that his story version was a sheer lie.

This is a salinet hallmark of the Brotherhood’s history. The leader of the Private Entity in charge of artillery training used to head to the El-Moqattam Mountain to conduct training sessions for members.  The memorandum of dissolution of the Brotherhood states: “On January 19, 1948, 15 Muslim Brotherhood members were arrested in the El-Moqattam Mountain area while training on the use of weaponry, explosives and bombs.  Large quantities of arms and weapons have been seized, in addition to other weapons of destruction and murder.”  El Banna responds, “The majority of the 15 people arrested do not belong to the Muslim Brotherhood.  They stated they were trained to fight for the cause of Palestine, especially after the [Egyptian] government hung back on recruiting volunteers.  The court accepted their appeal and they were immediately released.  Why would the Muslim Brotherhood be blamed for their actions? It was also noted that they were released because they had a noble cause to stand up for.”[7]

The truth was unveiled in 1987, when Ahmed Adel Kamal, one of the leaders of the Muslim Brotherhood revealed the full story, in his book, “To Connect the Dots”:

“We were tasked to find a safe place in Mount Moqattam so as to get training on the use of weapons and explosives.  El-Mokattam area is not that far off that would make one of us ask for “work leave” or “travel permit”.  It perfectly fitted the purpose that the place was very deep into the mountainous area, accessible by car, suitable as a shooting range, and far from sight.  We started daily training in this location in two groups; one group to start from dawn till 3pm and another from 3pm till dawn.  We used to drive a station wagon to get there and the two groups never met.  At all times, there was a guard high up combing the area through binoculars.  This guard was able to spot any oncoming vehicle at least 20 minutes before it arrives.  There were also underground ditches to store weapons and ammunition.   Kamal adds: “We continued coming and going till the car made a discernable trail in the mountain, and news were broke to the police without us knowing.”

The person in charge of training was there, too, but had forgotten to appoint the usual sentinel and suddenly found himself surrounded by the police. This happened on January 19, 1948 and was published in the papers. This takes us to the most important point in Kamal’s testimony.  He assures, “We were prepared to face all incidents.  Our brothers stated that they were volunteering to help the Palestinian cause. Such a response was prepared beforehand and agreed upon.  At the same time, there were “forms where their names” were written in Palestinian Volunteer Centers (PVC) to substantiate their cooked-up story.  We then contacted Hajj Mohamed Amin El-Husseiny, the Palestinian Mufti and Chairman of the Supreme Arab Committee, telling him exactly what happened, and he was very supportive to us.  El-Husseiny later testified that those arrested were volunteering for Palestine and that the weapons belonged to the committee.  The Brotherhood members were released and the weapons were handed over to the Supreme Arab Committee. That is how the Brotherhood was led by El Banna and how the Palestinian Brotherhood was led by the Jerusalem’s Mufti, conspiring to trick Egyptian authorities into releasing those convicts under the pretext of their noble cause.  Apparently, this was not enough for El Banna, he went on to document this incident as a point in favor of the Brotherhood with extreme belligerence exactly like his followers are doing till this very day.”

Kamal concludes his testimony with saying: “This incident had far-reaching repercussions.  The leader of the group – May God sanctify his soul – was arrested with a list that came to be known as the “Mountain List” containing 100 names of Muslim Brotherhood members with their secret codes divided into groups that were supposed to undergo training in the south of Cairo.  None of the Brotherhood leaders at the time knew anything about this list but it ended up surfacing in many cases and served as solid proof against accusations besides uncovering the names it contained.[8]”