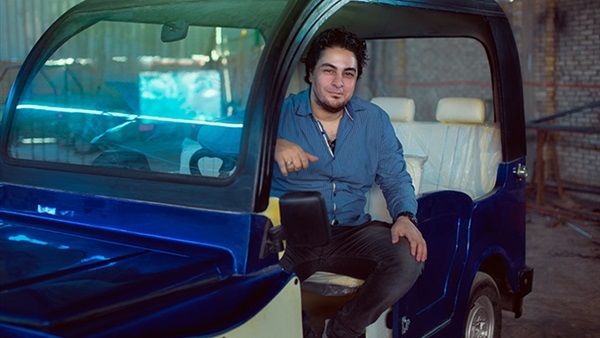 on: September 05, 2017
Cairo – A 35-year-old entrepreneur Ahmed Saeed al-Feki has been working hard to make something of himself, launching his own business building a mini-car.
In a village not far from the Giza pyramids, al-Feki set up a small workshop to create the first Egyptian-made mini-car, the “mini-car Egypt.”
“The idea came at the same time as the flotation of the Egyptian pound, so we decided to think outside the box and create a local product to replace the Tuk Tuk,” al-Feki said.
The golf-cart looking mini-car is different in design and mechanical efficiency from the Chinese Tuk Tuk — a three-wheeled motorized vehicle used as a taxi — which is popular in Egypt.
The mini-car’s engine power is 300cc, while the Tuk Tuk’s is 175cc. The body thickness is 4mm while the Tuk Tuk is only 0.75mm.

The First Egyptian-made mini-car
Al-Feki’s mini-car is also much safer because it is a 4-wheel car while the Tuk Tuk is only 3-wheeled. The mini-car also saves more fuel than the Tuk Tuk.
“The mini-car is similar to the Tuk Tuk, but I feel it is more practical when I drive it inside my village,” said 25-year-old Hossam Gamal al-Halawany, who has been the owner of a mini-car for only a few days. “It can carry more passengers — around five, in addition to the driver.”
“I am hoping to get a license for the mini-car to allow to me move around the whole city and not only my village,” Al-Halawany says.
Millions of Egyptians, especially in rural and densely populated areas, depend on auto rickshaws because of their cheap fares and smallness that make it ideal to navigate narrow alleys. Egypt spends about $290 million a year on imported Tuk Tuks from China.
The number of purchasing orders has grown and they are coming not only from Egyptian businessmen and companies but neighboring African countries as well, according to al-Feki.

The Tuk Tuk in comparison to the newly Egyptian-made mini-car
Al-Feki said one interested party invited him to manufacture his vehicle in Mozambique, which he declined.
For him, the startup had a nationalist dimension — he hopes to contribute to the Egyptian market, create jobs and increase the country’s export capacity.
The Egyptian entrepreneur is now working hard on refining and upgrading his product from just a hand-made car.
He was producing 30-40 per month on his own, but he is now taking his business to the next level after reaching a deal with the government to have the parts manufactured in army-run factories.
The parts come back to him and he then assembles the vehicles in a separate factory space, enabling him to ramp up production.
The minicar is currently on sale for LE34,000 Egyptian pounds, significantly less expensive than the Tuk Tuk, which costs LE38,000.
Share 0
Tweet 0
Share 0
Share 0
Share 0