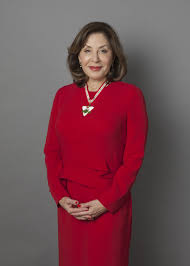 on: September 05, 2017
Cairo – Hoda El-Maraghy is an Egyptian scientist whose name went viral in social media circles, and gone down as one of Egypt’s most brilliant minds living abroad.
El-Masrawi, an online Arabic news site, published this profile about her.
Hoda Abdel Kader Gamal also uses the name Hoda El-Maraghy after her husband’s name,who himself is a renowned Egyptian scientist, Dr. Wagih El Maraghy.  She graduated from the Faculty of Engineering in Cairo University then traveled to Canada to continue her research work. She studied and earned her Master’s and Ph.D. degree from McMaster University.
In 1994, she became the first woman ever to become Dean of the Faculty of Engineering at the Canadian Windsor University. Prior to that, she was the first woman in Canada to acquire a Ph.D. degree in the field of mechanical engineering.
Over the course of more than 30 years, many companies and official institutions have sought to benefit from her vast accumulated experience and research which was documented in 350 papers published for many scientific conferences and in journals. Moreover, she has written three books in her field of specialty and co-wrote 13 other books, besides supervising dozens of research studies.
El Maraghy, who was awarded the Best Student Supervisor Award at Windsor University for providing a better environment for students to study, was rejected twice during her academic career.  The first time was when she traveled to Canada to complete her studies but Canadian universities did not recognize the certificates she obtained in Cairo. The second time was in Cairo when she decided to return to her homeland to benefit the country with her expertise, but officials in Cairo University told her that they will downgrade her academice status to ‘lecturer’ which led her to move back to Canada.
El Maraghy is considered one of the pioneers in the field of productive engineering which drove giant automotive companies as America’s Ford automotive to seek her help and expertise, eventually making her a consultant at Ford. Chrysler, another major automotive company had also sought her help in developing their production lines.
Dr. Hoda A. El Maraghy is a professor of Industrial and Manufacturing Systems Engineering, and the founding Director of the Intelligent Manufacturing Systems (IMS) Center at the University of Windsor. She has held a Tier I Canada Research Chair in Manufacturing Systems since 2002. After obtained her Master and Ph.D degrees in Mechanical Engineering from McMaster University, she became a professor and founding Director of its Flexible Manufacturing R&D [Research & Development] Center until she joined the University of Windsor in 1994 as the first woman Dean of Engineering in Canada.
Professor El Maraghy is a Fellow of the International Academy of Production Engineering (CIRP) and Member of its Governing Council, Fellow of the Canadian Society of Mechanical Engineers (CSME) and Fellow and Director of the Society of Manufacturing Engineers (SME). She has been recognized with awards and medals for her excellent research contributions and impact nationally and internationally. Dr. El  Maraghy is a member of several Editorial Boards of International Scientific and Engineering Journals, and Boards of Directors of Research Foundations, Granting Agencies and Centers of Research Excellence in Canada, USA and Europe. She has published more than 380 papers in scientific and professional journals and conferences, edited three books and contributed to 13 others.
Professor ElMaraghy’s research interests include: Manufacturing Systems Flexibility, Reconfiguration and Changeability, Products innovation and design, Products and Production Systems Co-Evolution, and Process and Production Planning. She has also contributed to the training of more than 100 highly qualified personnel.
Share 0
Tweet 0
Share 0
Share 0
Share 0