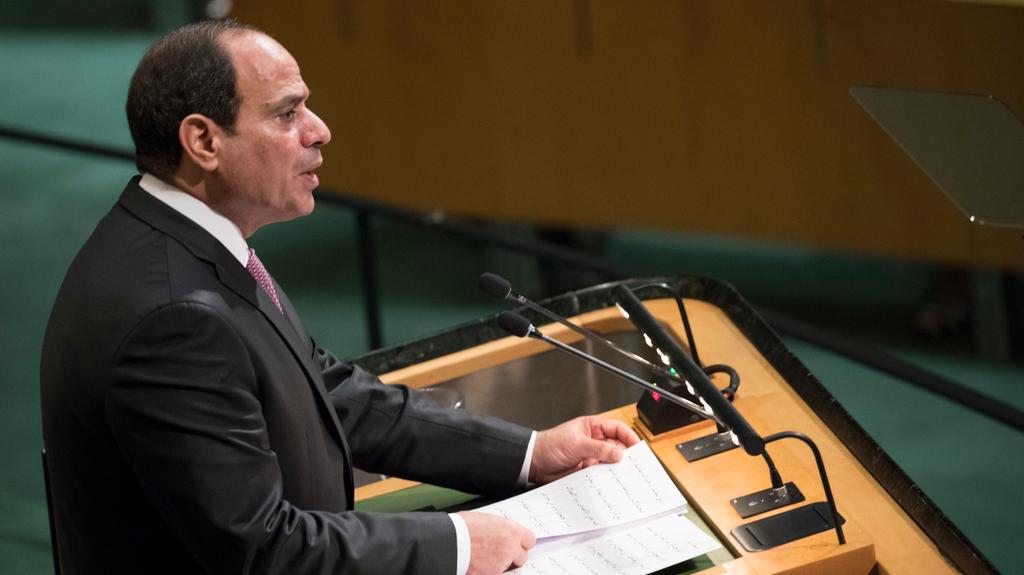 Al-Sisi urges Palestinian unity a day after meeting with Netanyahu

Al-Sisi urges Palestinian unity a day after meeting with Netanyahu

Cairo – Egypt’s president Abdel Fattah Al-Sisi urged Palestinians to unite and “be ready to coexist” in peace with Israelis in his address to the United Nations General Assembly.

Speaking on Tuesday, a day after his first public meeting with Israeli prime minister Benjamin Netanyahu, Mr Al-Sisi said an Israeli-Palestinian peace deal was a “necessary precondition for the entire region” to enjoy stability.

Egypt has been leading mediation efforts between Palestinian arch-rivals Fatah and Hamas as part of a push to return to the forefront of Middle East diplomacy.

Departing from his prepared remarks to the General Assembly, Mr Al-Sisi said he wanted to “tell the Palestinian people, it is important to unite” and “to overcome the differences and to be ready to accept coexistence with the other, with Israelis, in safety and security”.

The Egyptian leader made a similar appeal to the Israelis, saying that decades of Israeli-Egyptian peace could be expanded to the Palestinians to “overcome the barrier of hatred forever”.

“We can repeat this experience, this excellent step once again, together with the peace and security of the Palestinian citizens,” he said.

Egypt, which signed a peace treaty with Israel in 1979, has called for steps to kick-start Israeli-Palestinian talks that have been nonexistent since 2014.

In his own address to the General Assembly, Mr Netanyahu said Israel was committed to achieving peace with all Arab countries and with the Palestinians but he did not elaborate on how this could be achieved.

Mr El Sisi, meanwhile, said “an independent Palestinian state” with east Jerusalem as its capital is “a necessary precondition for the entire region to transit into a new phase of stability and development”.

An Israeli-Palestinian peace deal would eliminate “one of the main excuses” used by terrorists in the region, he argued.

Turning to the United States, where president Donald Trump has said he is pushing for negotiations between the Israelis and Palestinians, Mr El Sisi declared that there was an “opportunity to write a new page in history to achieve peace in this region”.

The meeting between Mr Al-Sisi and Mr Netanyahu in New York on Monday followed a rare phone conversation between Palestinian president Mahmoud Abbas of the Fatah party and Hamas chief Ismail Haniya.

Egypt has been mediating between Mr Abbas’ West Bank-based Palestinian Authority and Hamas, which has controlled Gaza since 2007.

After Mr Haniya met Egyptian officials in Cairo last week, Hamas announced it was agreeing to demands by Fatah to dissolve its rival administration in Gaza, while saying it was ready for elections and negotiations to form a unity government.

For much of the last decade, Egypt has joined Israel in enforcing a land, sea and air blockade of Gaza, a move to punish Hamas, which has ruled the enclave since a brief Palestinian civil war in 2007.

Mr Netanyahu has said in recent weeks that ties between Israel and its Arab neighbours have been improving and that co-operation exists “in various ways and [at] different levels”.

Egypt was the first of a handful of Arab countries to recognise Israel under the US-sponsored peace accord of 1979. But Egyptian attitudes to its neighbour remain icy due to Israel’s continued occupation of land that is meant to form a Palestinian state.

Under pressure from the blockade, Hamas has sought to mend ties with Egypt, which controls their one border crossing. Egypt under Mr Al-Sisi has been wary of ties between Hamas and the Muslim Brotherhood, which the Egyptian president ousted from power after mass protests.