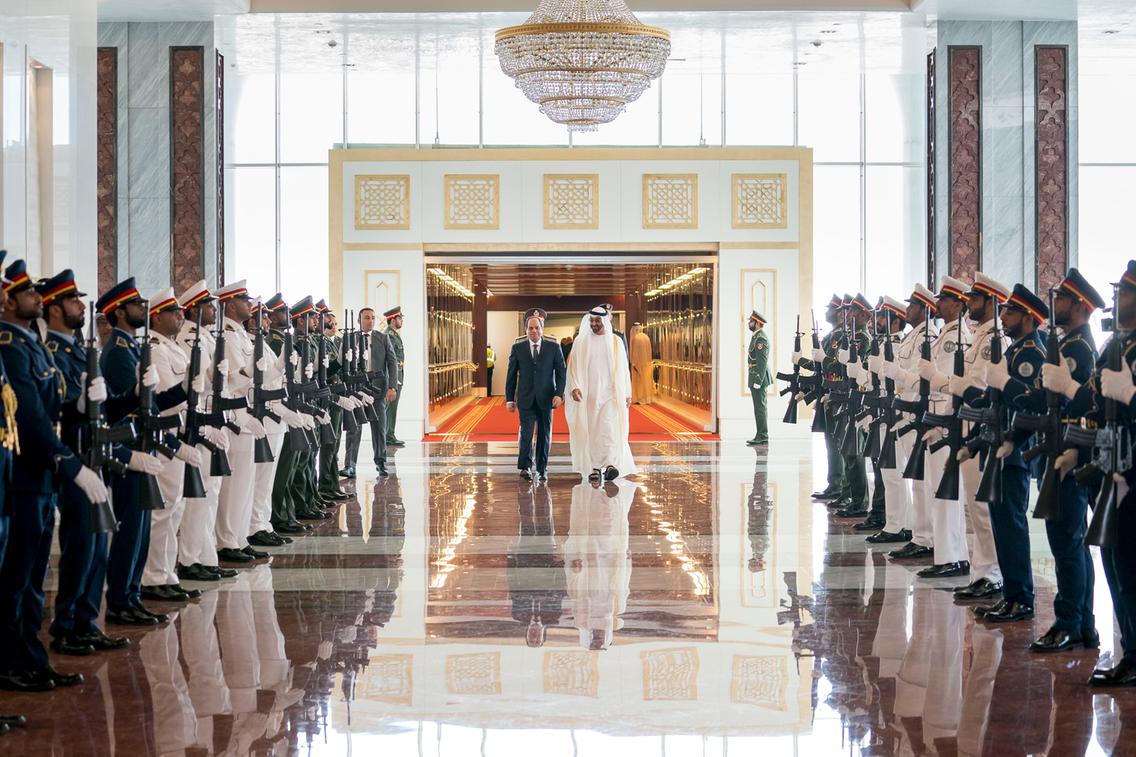 The two sides agreed to concentrate efforts along with the international community in tackling extremism across the region and eliminating interference in the internal affairs of various Arab countries.

“The Emirati-Egyptian co-ordination has proved its hardness over the past years in facing various challenges in the region, foremost of which is the challenge of terrorism, which has become a serious global threat that cannot be tolerated,” Sheikh Mohammed bin Zayed said to UAE state news agency Wam.

Combating this threat “calls for a serious Arab, regional and international stand to face this threat, that targets everyone without exception”, he added.

Mr El Sisi stressed Egypt’s keenness to continue developing bilateral relations and co-ordination with the UAE at all levels on various regional and international issues.

The security of the Gulf states is an integral part of Egypt’s national security, he said.

The visit reflects the “two countries’ keenness to consult one another on the current challenges faced by the region” which require “joining efforts to protect Arab national unity against attempts to destabilise Arab states and interfere in their domestic affairs”, the Egyptian president added.

Mr El Sisi’s discussions during his two-day visit to the UAE will focus on deepening relations and improving stability in the region, the Egyptian state news agency reported, quoting the president’s office.

“The president will discuss with senior UAE officials the close bilateral relationship between the two countries, as well as consulting and co-operating on a number of issues including combating terrorism along with regional and international crises,” it said.

The visit comes after the UAE, Egypt, Saudi Arabia and Bahrain cut diplomatic and travel ties with Qatar on June 5, accusing Doha of supporting terrorism and extremism and trying to destabilise the region. The boycott has resulted in the worst diplomatic spat in GCC history.

The UAE and Egypt are also working to promote political stability in Libya, where the lack of a central authority has allowed extremist militant groups such as ISIL to gain a foothold in recent years.

Wael Al Sayed Mohammed Jad, Egyptian Ambassador to the UAE, said strategic relations between the UAE and Egypt are based on historic foundations.

Mr El Sisi’s visit will also look to strengthen economic and commercial relations between the two countries, he told Wam.

According to the ambassador, the UAE is the leading foreign investor in Egypt, with the value of Emirati investments reaching US$6.2 billion (Dh22.8bn), while the value of the commercial exchange between both countries in the previous year reached $3.3bn, with $2.4bn accounting for Egyptian exports and $900 million for Emirati exports to Egypt.

There are further opportunities to develop these ties, he added.