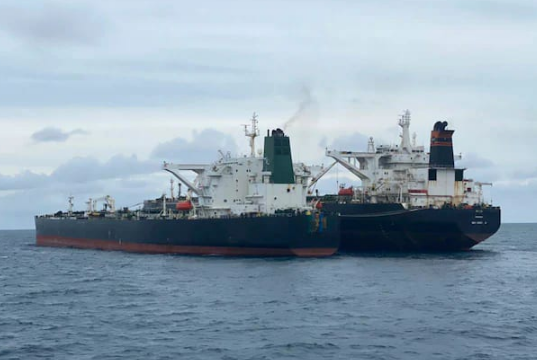 Nikki Haley served as governor of South Carolina, 2011-2017, and U.S. ambassador to the United Nations, 2017-2018. She is a senior adviser to United Against Nuclear Iran.

Here’s a riddle: Iran has no access to international banking systems. It can’t do business with firms that want to access U.S. markets. Most of its assets are frozen. So how does the cash-starved Iranian regime continue to fund terrorist groups across the Middle East?

The answer, increasingly, is China. And President Biden has largely chosen to look the other way as China steadily buys millions of barrels of Iranian oil.

Late last month, an anonymous U.S. official told Reuters that the administration has “been approaching this diplomatically with the Chinese” because doing so is “a more effective path forward.”

Really? Tracking Iran’s oil sales to China is difficult because much of the trade is covert, but industry monitors report that in 2021 China imports hundreds of thousands of barrels of Iranian crude per day.

Every barrel of Iranian oil offloaded in Chinese ports is a violation of sanctions the United States put in place to starve revenue from Iranian terror and its nuclear program. Yet the Biden administration leaves Chinese firms unpunished for doing business with the ayatollahs.

Why would Biden let this brazen defiance continue? Two reasons. On Iran, he has said that dialogue and diplomacy are the key to progress, especially when it comes to reviving the Joint Comprehensive Plan of Action negotiations over Iran’s nuclear program. The previous administration withdrew from the deal in 2018.

As for China, Biden’s policy is incoherent. He often seems hesitant to take steps that might hamper his ability to negotiate a climate deal.

The Chinese Communist Party and President Xi Jinping know that supporting Iran is good for Beijing and bad for America. Iran is an important part of the CCP’s Belt and Road Initiative, through which China gains trade access in exchange for infrastructure funding. There’s no world in which China’s involvement in the Middle East makes the United States safer.

A strengthened partnership with Iran is also critical to China’s energy interests. Through an illicit tanker fleet known as its “ghost armada,” Iran is able to violate sanctions at will. The Federal Reserve of St. Louis estimates Iran’s crude-oil exports at 558,000 barrels daily, rising to 608,000 next year. It is sitting on some of the world’s largest oil and natural-gas reserves.

China wants access to those energy sources, and if Beijing can get it while propping up the United States’s enemy, all the better.

Iran and China have recently taken their alliance a step further. Last year, they finalized a “strategic partnership” that commits Beijing to investing $400 billion in Iran over 25 years. In exchange, China will get long-term access to discounted Iranian crude supplies and deepen its presence in Iran’s ports, railways, telecommunications and elsewhere. The agreement also strengthens their military ties.

None of this bodes well for the United States. If Biden won’t hold Iran or China accountable, Congress should.

To start, Congress can enact sanctions on the People’s Bank of China and other Chinese banks that deal with the Central Bank of Iran. They should tie any relief to compliance with U.S. sanctions against Iran. Lawmakers can also place sanctions on Chinese entities that store Iranian oil or help operate, maintain, register or insure vessels that transport it. The United States has imposed similar sanctions on North Korea, to great success.

But Congress can only do so much. Instead of foolishly trusting in diplomacy, the Biden administration should make it more difficult for Iranian oil to leave for China. That means instructing the Treasury Department to sanction individual vessels carrying Iranian oil and the countless storage specialists, port authorities, importing agents and others who aid in shipping.

We know these shipping sanctions work. In November 2018, the United States reimposed sanctions on 90 Iranian oil tankers; Iranian oil exports dropped significantly. Before the sanctions, Iranian-flagged tankers transported approximately 188 million barrels of oil. The following year, that number was cut in half, and by 2020, exports were down by two-thirds.

It is only since Biden took office, and restarted negotiations with Iran, that its oil exports have soared. Today, Iran is using foreign-flagged tankers to get around the sanctions — a loophole that must be closed.

The status quo is unsustainable. Iran is winning. Communist China is winning. Terrorist groups in the Middle East and beyond are winning. The United States and its allies are losing. The president may prefer negotiations, but they have only emboldened those who wish America ill. National security is nonnegotiable.