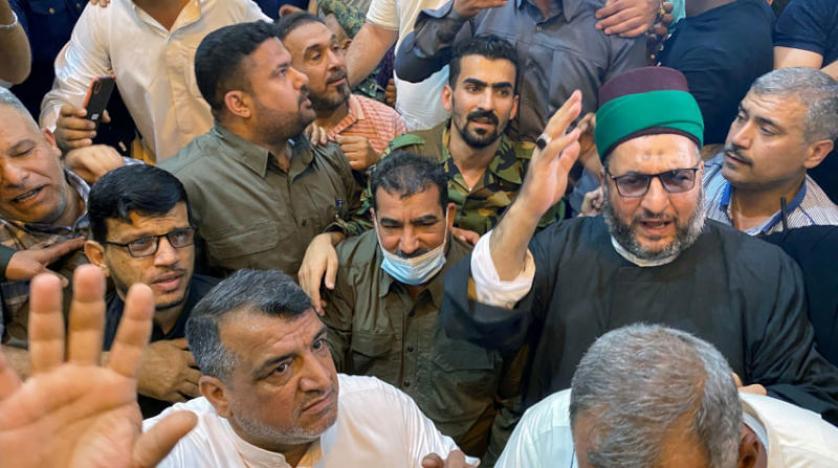 Senior sources said the Iranian official’s visit was aimed at coordinating with the government of Prime Minister Mustafa al-Kadhimi.

Muslih was arrested two weeks ago by police intelligence on suspicion of ordering the May 9 killing of prominent anti-government activist Ihab al-Wazni, who was shot dead by men on motorbikes using a silencer.

Iraq’s Supreme Judicial Council said in a statement that it had found “no proof of his involvement”, and that it had established “that he was not in Iraq at the time of Mr. Wazni’s assassination”.

But a senior official decried the decision to release Muslih.

“The government presented all available evidence, but the judges have decided to release him because of pressure exerted on them,” said the official, who wished to remain anonymous.

In wake of Muslih’s arrest, security forces had barred entry to Baghdad’s high-security Green Zone — home to the US embassy, parliament and the premier’s office — after the PMF quickly deployed armed men and armored vehicles in a show of force.

Senior sources had told Asharq Al-Awsat on Tuesday that the government and armed factions were seeking a settlement to defuse the tensions.

The settlement would have called for his release in return for easing the tensions.

“The political settlement, which Iran has urgently been pushing for, demands that the PMF completely cease its raids of government facilities, while Kadhimi would hold back from targeting major Shiite PMF members,” revealed the sources.

Sources close to the PMF said that Qaani carried “clear and specific” messages from the Iranian regime to prolong the calm in Iraq, especially in light of the recent crisis.

Kadhimi, in return, informed the Iranians through Qaani that the government “will not allow the state’s authority to be violated.”

The sources said that the negotiations for Muslih’s release witnessed massive pressure on Iraqi authorities to turn a blind eye to the investigations that were carried out with him.

Qaani’s visit was aimed at putting this case to rest permanently, they added.

The Iranian official’s trip coincided with preparations by armed factions to hold a military parade in mid-June to mark top religious authority, Ali al-Sistani’s call in 2014 to fight the ISIS terror group.

A senior PMF source said that Kadhimi will attend the parade.

Speaking on condition of anonymity, the source added that some 70 PMF military units will take part in the event, which will feature Russian armored vehicles and tanks that were manufactured in Iran.

Moreover, the official said he has received requests from Iranian officers to attend the parade, a precedent since the fall of the Saddam Hussein regime in 2003.

The senior source revealed that Kadhimi has yet made up his mind about attending the parade, due to the arrangements that the factions are proposing.

The PM, meanwhile, wants to adopt common protocol for these sorts of events, in his capacity as commander of the armed forces.