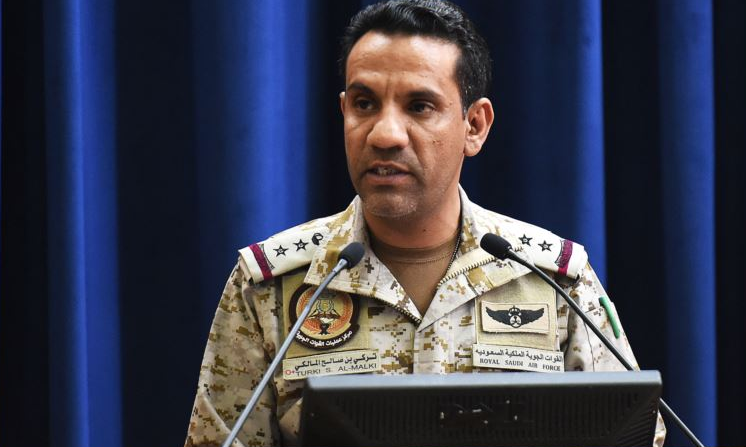 Col. Turki Al-Maliki, the spokesman of the Arab Coalition, said on Monday that the political efforts to resolve the Yemeni crisis continue through the UN envoy Martin Griffith.

He added, during the weekly press conference: “We agree with the European Union on all axes, political as well as humanitarian efforts to alleviate the suffering of the Yemeni people”.

He stressed that the military operations in Yemen aim at pressure on the Houthi militias to sit at the table of a political solution, pointing out that the coalition respects the international law.

Al-Maliki pointed out that Houthi’s intransigence thwarted all the political efforts to resolve the crisis peacefully.

He also said at the press conference that the land, the sea and the airports in Yemen are working to deliver humanitarian aid to civilians, while Houthi militias deliberately obstruct humanitarian efforts in Yemen.

He pointed out that more than 25 thousand permits have been granted to enter humanitarian relief aid to Yemen, stressing that the militias bear the legal responsibility for their violations.

He pointed out that the Houthi militias are still engaged in forced recruitment of children, which is contrary to international law and deliberately disabling ships carrying oil materials to prevent them from entering the port of Hodeidah.

He stressed that Saudi Arabia will continue to protect its territory from missile targets by Houthis.

He pointed out that the operational pressure of the Yemeni National Army continues with the support of coalition forces on all fronts.

He added: “The coalition knows through intelligence sources the number of elements of Hezbollah involved in supporting the Houthi militias”.  The terrorist elements from the Hezbollah militia and Iran, support Houthi.

He stressed that the liberation of Hodeidah will stop the smuggling of all weapons to the Houthis, including ballistic missiles.

In conclusion, Maliki said that the humanitarian operations in Yemen began from the first day with the political work and will continue from the coalition forces.