Latest Posts
20:04
Home Reports Elysée to the Reference…Macron’s visit to Mulhouse is a plan to fight against Islamism and discrimination 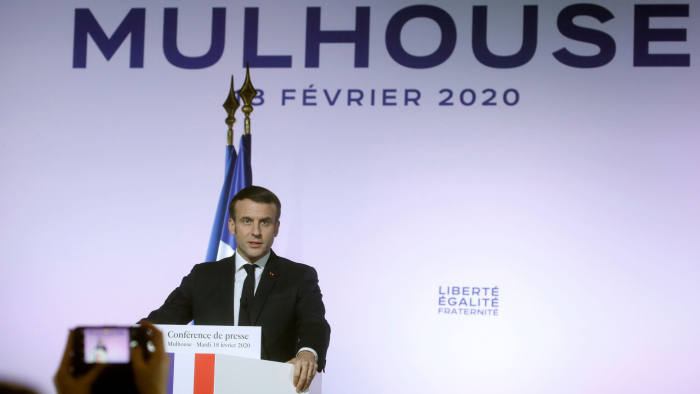 PARIS (Special to the Reference)

In a call to the Elysee Palace, the Reference finds out the significance and objectives of the president’s visit to the city of Mulhouse in northeastern France.

Macron’s office made it clear that this visit focuses on a very sensitive file that the president promised to address at the beginning of 2020, which has been the subject of a large number of inter-ministerial meetings in recent weeks.

The president of the state chose this city to discuss issues related to combating Islamic separatism, “which is related to the phenomenon of religious sectarianism, financing places of worship and training imams and therefore the purpose of the visit is the necessity of the state regaining its presence in some areas through the system of restoring the values ​​of the republic, and therefore these measures must be found within the framework of an official strategy New in the face of Islamic extremism.

The Elysee said that about sixty people were met in discussion and consultation sessions around a round table, from the region’s security directors, governors, some elected officials and representatives, heads of institutions, associations, social organizations, businessmen, and residents.

Sectarianism and extremism: The Elysee explained to the Reference that President Macron will impose restrictions on sending foreign imams and teachers to France in order to eliminate what he described as the danger of discord.

Macron devoted most of his agenda to the “environment” last week, by presiding over an environmental defense council in the Elysee and making a visit to the foot of the Mont-Blanc White Mountain.

This week he decided to change the tone and the interface with a visit devoted to the issue of sectarianism and separatism in the Republic, the strategic axes of Emmanuel Macron and Versa bet for him, the elections were avoided before entering into issues related to the Muslim community in France, only focusing on economic reforms.

Unleashed his electoral campaign less than a month before the municipal elections, and resolved to extend his national tour beyond the municipal elections whose sessions are scheduled for 15 and On March 22nd, which is a political measure for the presidential elections In May 2022 Macron seems determined to expel the Green Party and Marine Le Pen from the scene, trying to pull the rug from under the feet of the far-right leader who began taking over most of the French municipalities in her first attempts to reach power by changing France’s political face in the local elections, which will draw milestones.

The next government, and thus the way has become paved for it to formulate a comfortable parliamentary base with a political majority that enables it to compete with Macron in the presidential elections and avenge itself on the past elections…

Marin succeeded in gaining the votes of the French who reject the deteriorating security conditions in the country and they are Many and imposed themselves as the second political force in the country and led the right-wing extremist movement in Europe with distinction.

While Macron is also trying to pull the political rug out from under the feet of the Green Party, which started to capture the votes of the voters after it changed the features of its power, the influence of the European Union countries…For this, Macron began the features of his strategy to work to stop foreign funding of mosques and Islamic centers that have found influence in The heart of Europe has captured most of the poor and marginalized people in the slums who have become easy prey for the terrorist organization ISIS.

France has registered sending a large number of them to Turkey with the aim of tourism, but French intelligence later discovered that they are fighting in Syria and Iraq.

French President Emmanuel Macron has said he will curb the practice of foreign countries sending imams and teachers to France to crack down on what he calls the risk of “separatism”.

Macron has so far stayed away from issues related to France’s Muslim community, the biggest in Europe, focusing instead on economic reforms.

But in a much-anticipated intervention less than a month before mayoral elections, Macron on Tuesday said he would gradually put an end to the system in which Algeria, Morocco and Turkey send imams to France to preach in mosques.

“This end to the consular Islam system is extremely important to curb foreign influence and make sure everybody respects the laws of the republic,” he told reporters in the eastern city of Mulhouse.

Macron said 300 imams were sent to France every year by these countries, and that those who arrived in 2020 would be the last to arrive in such numbers.

He said his government had asked the body representing Islam in France to find solutions to train imams on French soil instead, ensure they can speak French and do not spread “Islamist” views.

Macron, who is constantly attacked by far-right leader Marine Le Pen on the issue of how to integrate French Muslims, also said he would end the practice of French students being taught by teachers paid by foreign governments.

France has agreements with nine countries, including Algeria, Morocco, Tunisia and Turkey, whereby their governments can send teachers to French schools to teach languages to students originally from these countries.

Macron said he had found an agreement to end the practice with all of these countries except Turkey.

“I won’t let any country, whatever it is, feed separatism,” Macron said. “You can’t have Turkish law on French soil. That can’t be.”

There are between 5.5 million and 6.2 million Muslims in France, or roughly 8 percent of the total population – making the group the largest Muslim minority in Europe.

After the 2015 attacks in Paris, the deadliest shooting in French history that killed 130 people, scores of mosques have been closed down under anti-terror laws.